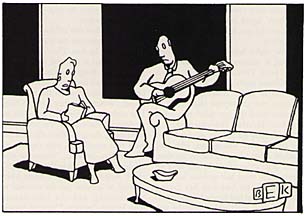 "That was very nice. Can you drive me to the embassy now?"

Since moving to the metropolitan Washington DC area several years ago, I have received a fair number of friends, family and acquaintances for visits. I used to live in the San Francisco Bay Area and just about everyone I know came and visited and stayed for at least a week, which is wonderful of course -- "ghadam rooyeh cheshm!" But here in DC, they are in and out in less than 48 hours.

I had to find out what was going on. So I asked a trusted friend. You probably have one of these trusted friends too. The one who wipes the top of your shoulders after a recent haircut (even though you are wearing a perfectly clean ironed shirt!) The one who tells you how ugly your couch is. And the one who reminds you that ZoleikhA whom you met six years ago in that chelo-kababi in Los Angeles was your best chance and you blew it.

My friend told me not to take it personally, but my guests drop by just to take care of their passport or shenAsnAmeh at the Interests Section of the Islamic Republic of Iran. The proverbial "do-zAry" fell in! Well, of course. Now I understood completely.

I told you. In and out under 48 hours. And nice enough to visit during the week and leave the weekend for myself. Jal-al-khAlegh!

Well, there goes a good night's sleep in the middle of the week. How would I explain this to my American boss when he notices that I am less than with-it the next day? How can I make him understand that my friend needs, among other things, to give power-of-attorney to his wife's sister's husband who lives in a city that's not even on the map?

Over the years, I have become quite familiar with the area where the Interests Section is located, in Wisconsin Ave. NW in Wahsington DC, north of Georgetown. It is right next to a funky furniture store (one of their couches goes for $15,000). There is a Starbucks a couple of blocks down, a Safeway where you can buy your money orders ("But only after 8:00 AM and I know you want it for the Iranian Embassy" the clerk notifies you), not too many available parking spots, several restaurants including an Iranian one, and lots of speeding cars (don't just jump in the street as if you are crossing khiAbooneh nAderi).

The procedues for obtaining a passport (or doing anything with it) has changed due to the massive number of applicants. It used to be that you would show up around 5 or 6 a.m. and you would get in by 8 and take care of your business. But now, the number of people coming in has increased several folds. I must say the office is working with very limited resources and they try their best to take care of everyone.

The staff work very hard under restricted circumstances (read: U.S. State Department limitations. Did you hear that Madeline? How about some more office space and better air-conditioning?). They have unbelievable doses of patience. We all know it is not too easy dealing with eager, demanding, determined and low-patience fellow countrymen and women. The staff really work very hard and deserve recognition and credit. (DISCLAIMER: I do NOT belong to any goorooh/hezb/dasteh/sAzmAn/neh-zat/jonbesh/ravesh/manesh/tareegh/rafeegh/fergheh/forjeh/etc. I just tell it like I see it.)

So, where were we?

So I eat dinner (FYI: leftover khoreshteh gheymeh, soggy tah-deeg and mAsto-reyhoon) and head to DC to sign up my friend's name on the waiting list. Last time I was there at the Interests Section, I arrived at 1:30 in the morning only to be number 53 on the list for the next morning. Fifty-three at 1:30 a.m.! This time, however, I had heard thru a friend (AghA Bahram) who heard it from his friend (Mammad AghA) who in turn heard it from his own sister (Mammad AghA's sister), that they start giving out numbers at 11:30 at night and you need to get there in line so that you can get a nomreh and get into the building the next morning.

That night, by chance, I showed up around 8. There was only a note on the door advising of the 11:30 p.m. procedure. There was also an elderly gentleman with a list of names who was apparently the unofficial holder-of-the-list (don't discount this position. This guy has power over people's lives. He also receives unbelievable amount of grief and headaches from everyone). This was the list to sign. And when they call you for a number, you go in turn according to the list and get your name on another list (official this time) for entering the office in the morning.

Even though I went early, I still ended up being 53rd. But remember, if you sign up on the list but are not present at 11:30 for the official "hAzer ghAyeb" YOU WILL BE DROPPED! Thus, my number 53 became number 34 when people failed to show up. Ha ha!

Meanwhile, my friend is arriving at some ungodly hour and driving over to catch only a couple of hours of sleep.

Next morning around 5 we get up and drive over to DC. With "salAmo salavAt" we show up at the office around a quarter to 6. The crowd is almost the same as the night before. Some have gotten some sleep and changed, and the others, well, look like they slept in their cars. One of the officials of the Interests Section comes down, opens the door at about 6:30 and starts reading from the list. Each entry is allowed one passport. No cheating, no exceptions, no ifs or buts. One by one they go in. By about 7:30 my friend goes in. He has his documents in order and he is taken care of and out by the end of the day. The "bAjenAgh" in Malayer can now sell the "zameen-e erseh pedari."

Yet another disclaimer: The information regarding the procedures are based on personal experience and according to the best of my knowledge. They may or may not have changed by the time you read this. Again, make sure you arrive early and have ALL YOUR PAPERWORK READY. And to all my future out-of-town guests: "manzeleh khodetooneh. ghadam rooyeh cheshm. ghAbel nadAreh. ghameh Akhare-toon bAsheh."

* Interests Section of the Islamic Republic of Iran