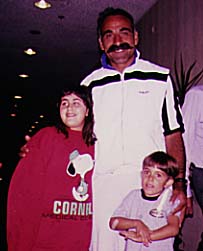 From "The greatest Wimbledon winner we never saw" by Robert Phillip of the The London Telegraph (Monday 7 July 1997).

BUT FOR Ayatollah Khomeini, who saw tennis as a tool of Satan, Mansoor Bahrami might have been the only son of an Iranian hill tribesman to win Wimbledon.

I exaggerate not. Ilie Nastase addresses him as 'maestro', John McEnroe describes him as 'a genius', and Rod Laver believes him to be 'the most naturally-gifted player ever to pick up a racket'. Since he did not possess a proper racket until he was 13 - he taught himself to play using a rusty old metal dustpan - he is undisputably the greatest player ever to pick up an item of ironmongery.

At 41, he still represents Iran in the Davis Cup, though it is in exhibitions and on the ATP Seniors Tour that he has belatedly earned cult status; part player, part wizard, wherever and whenever he performs, Nastase, McEnroe and the rest of the locker-room come to marvel. For to watch Bahrami, is to watch Merlin at work . . .

His trademark volley lands at an opponent's feet then spins crazily back across the net to return from whence it came, his fearsome 'backhand' serve - an impossibly acrobatic flight of fancy which defies the laws of physics and anatomy - hits the ground before bouncing off at a tangent like a Mexican jumping bean.

Imagine, if you can, a Shane Warne googly on LSD. He hits winning drop-shots from behind his back, conjures devastating lobs from between his legs, and, when not passing the time between points by hurling his racket high into the sky like an American baton-twirling champion, will juggle three balls in one hand while curling his handle-bar moustache with t'other.

"So you want to hear my life story?" he asked with a gentle smile as he gazed down across the lawns of the All England Club from the balcony of the players' restaurant. With his soulful dark eyes and weathered skin, he could be a desert sheikh sent into our midst by a Hollywood casting director; instead of which, Mansoor Bahrami is a living phenomenon.

"You think they will believe this? The dustpan, the poverty, the Ayatollah, the years of not being allowed to hit a tennis ball, sleeping rough in Paris, on the run from the police . . . yes, I suppose my tale is a little out of the ordinary," concedes Bahrami, who was nine months old when his father left the northern uplands of Iran in 1957 to settle in Teheran.

"I am told we had cows and sheep and land. Then suddenly we had nothing. Maybe drought, I do not know. So my father became a gardener in the biggest sports club in the country - wrestling, volleyball, soccer, three swimming pools and 13 tennis courts. I was not allowed to play. Tennis was only for the wealthy families of Teheran and foreign diplomats.

"My father, mother, two brothers and myself lived in one small concrete room, 100 feet square, which was our living room, kitchen, bathroom and bedroom. It made me sad to see my father - 60, 70, who can say? - working so hard for so little pay."

At the age of five, when tots in this country are chanting the alphabet and two-times table, Mansoor became a professional ball-boy, earning a few pennies an hour. Through studying others, however, he became utterly infatuated with tennis and began playing when he was seven "with anything that looked like a racket. A dustpan, frying-pan, broom-handle, a piece of wood. That's how I learned, usually at night, barefoot, when they had drained the swimming-pool - hitting an old ball someone had thrown away against the wall of the pool with a saucepan or whatever."

On his 10th birthday, Bahrami's idol, Iranian Davis Cup captain Sheezdad Akbari, presented his favourite ballboy with a glistening Dunlop Maxply. His dustpan days were over. "I was only small yet I can remember the heat. I sneaked on to the court one afternoon and had been playing only two or three minutes when I was surrounded by guards. They beat me terribly, I was bleeding everywhere and, worst of all, they smashed my racket."

It took the Shah's friends on the Iranian Tennis Federation a further three years to accept they had a teenage prodigy in their midst. In 1973, the 17-year-old Bahrami was given a 'minder' and dispatched to Wimbledon, where he was drawn against the all-conquering American teenager Billy Martin in the first round of the boys' singles.

"Two years in a row Martin won the junior event without conceding more than two games in any set. He beat me love-and-love, yet I knew I was a better player than him. How? Because my chaperone left me in the hotel room for three days and nights without food while he went off to shop. Finally he came back and said 'Mansoor, you play in one hour'.

"I had never seen a grasscourt before, never mind played on one. I had two rackets, Billy Martin had 15. I swear to God, Billy Martin was the most successful junior player in history, but he was not as good as me."

Two summers later, Bahrami returned to London to make his Davis Cup debut against Roger Taylor (he lost 6-0, 6-0, 6-2) but being a quick learner, either on grass or with a frying pan as a racket, thereafter won nine of his next 11 singles matches in the competition before the Ayatollah's henchmen banned tennis in revolutionary Iran.

"For three years I was not allowed to hit a ball. I existed by playing backgammon all day." Finally, a friend of a friend of a friend persuaded the new foreign minister to grant Bahrami a visa to visit France. And so he arrived in Paris with no money, no friends, no language and no possessions, save a suitcase of tennis clothes and his rackets.

"I chose France because there are hundreds of small tournaments with prize money. But you have to win to collect the money. For weeks at a time I had nowhere to sleep so I would walk the streets of Paris. Often, I would make one baguette last three or four days." Having lost three years of his career because of the Islamic fundamentalists, Bahrami then spent the next six years as a virtual prisoner in France because he refused to become a political refugee.

"A political refugee is someone who risks being killed if they go home - I was only a tennis player, but I did not dare leave France in case they did not let me back in. If you had an Iranian passport in the early 1980s, very few countries would accept you.

"When my French visa finally ran out I became an illegal immigrant. Every time I saw a policeman coming I changed direction. If they had asked me for my papers or ID they would have put me on the first plane back."

In 1981, Bahrami reached the third round of the French Open as a qualifier, whereupon his cause was taken up by L'Equipe and Le Figaro, who demanded the renewal of his visa. Even so, having been prevented from even hitting a ball from the age of 21 to 24 by the Ayatollah, Bahrami was 30 before he could finally join the ATP as a full-time professional.

"I lost nine years of my life. All my best results (15 finals and five tournament victories) came after the age of 30. I was 33 when I reached the French Open doubles final. Am I angry? No, I'm not angry. I feel I am a very lucky man.

"How good would I have been? Who knows? Nastase says I would have been in the world's top 10 for sure. Yes, I believe I could have been Wimbledon champion. But I am happy. I play 45 weeks a year and travel more than any other player. Anyway, it is good for the soul to go hungry at some time in your life."

As the most popular competitor on the seniors' tour, Bahrami no longer has to go hungry or walk the boulevards because he has nowhere to sleep. He lives in Paris with his French wife Frederique and two sons (Sam, 12, and Antoine, 7).

Bahrami met Frederique at one minute to midnight on New Year's Eve 1981, when he was trapped in a traffic jam in the Champs Elysees. "It was crazy. Everyone switched off their engines and we sat there. I saw this lady in the car next to mine. I thought she was nice and asked her if she spoke English. She said 'yes'.

"I asked her if it was true that everyone hugged and kissed each other at midnight. She said 'yes'. By this time it was 12 o'clock so I got out my car and kissed her and wished her happy New Year. I never thought I was going to marry her."

Belatedly, Bahrami is recognised not only as a tennis player of extraordinary talent, but as the game's greatest entertainer. "I love playing. I love to feel people are having fun watching me. I cannot tell you how many matches I lose that I should win because I am joking around. Often I win but I feel the people haven't enjoyed it so I am upset. I love to make them laugh. When the crowd laughs, I am the happiest man in the whole world."