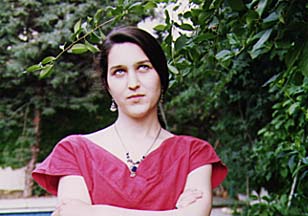 By Ramin Tabib
October 1997
The Iranian

In my apartment complex, there are a number of Iranian families. This low-rise building in West Los Angeles is managed by an Iranian and home to at least five or six Iranian families. I do not know any of them. I leave early and return when it is dark outside so there are not many opportunities to meet them. Besides, this is not Iran. Iranians here do not venture out to actively seek each other. In fact, the reverse is true.

My only contact is when I infrequently see them in the parking garage or by the mailboxes. With all the patios opening to a common walkway, I also hear their voices when I return home from work and pass the walkway toward my apartment at the end of the building.

In Los Angeles' perpetual state of summer, most windows remain open night and day, and with my building's strange southwestern design, most of the apartments face each other closely, and voices travel through the patio doors toward untargeted ears. I hear all kinds of things through windows of my neighbors, especially the Iranians.

On few occasions I have actually learned a few things. I didn't know, for example, that you can curse someone by saying: "Jeegaret roo takht-e mordeshoor khooneh baalaa biyaad."

Apparently that's a common curse. I had to think about it for it to sink in. But, to be fair, not all I hear is bad. Sometimes, a great compliment is paid and overheard, such as: "Beh khodaa ageh mitoonestam taamaameh setaarehaa ro beh paat meereekhtam vali haalaa hamin del ro az maa qabool kon."

I think the lady on the other side of this compliment accepted the offer because all I heard was silence.

In one of these small apartments, there is an Iranian girl, actually a young woman, seventeen or eighteen, who lives with her mother. She is not very tall and has short hair, classic Persian face and what we would call a whole lot of namak . I had seen her sometimes as she got into her car and, once up close as she collected her mail.

Many times, at the end of the day when I got home, I would hear her playing music: loud, fast and with a lot of beat. She often danced by herself, and her moving silhouette fell on the curtains of her patio window. Often, I opened the door to my apartment and sat on the top of the stairs that led to my door, lit a cigarette and listened to her music blasting from across the courtyard.

One day, when the newspaper again said ninety-three degrees and dry, I, as usual, stepped out into the dark and sat on the stairs. I lit my cigarette and hoped my private radio station would play across the building.

But luck had it that the young woman was in the middle of a huge fight, apparently with her mother. Arguments raged and curses flew. A couple of my Iranian neighbors came out of their apartments, curiously searching for the source of the loud, shrieking voices. But the Persian TV program was on and soon their interest waned, and they returned to their apartments.

The mother and daughter went on for about forty-five minutes, throwing both words and objects at each other. From what I could hear, there were a lot of misgivings. Her mother fumed over her daughter's choice of boyfriends, the fact that she had refused to return to Iran, that she spent money on clothes that revealed a sense of bi hayaa-ee and of course her choice of music.

At the end of the fight, I heard a door slam and the young woman ran from her apartment. She walked fast and furiously toward my side of the building and sat on the bench at the bottom of the stairs in front of me. She buried her face in her small hands and cried, feverishly.

Partly because her sobbing was so heart-wrenching and partly out of fozouli , I asked her if there was anything I could do. She was startled by my voice, raised her head, and seeing me at the top of the stairs looking at her, stopped crying: "Nah, mersi... bebakhshid keh man intoriyam. Dasteh khodam nist."

I went back into my apartment, got a box of tissues and a glass of water and came out. I walked down the stairs, sat on the lowest step and handed her my offerings. She smiled as she took them. I asked again if there was anything I could do.

But she needed to vent, and she did. She went on for fifteen minutes about how she loathed her restrictions, and how unfair her mother's expectations were. I listened, sometimes to her words and sometimes thinking to myself how her every simple gesture was far more beautiful than anybody else's I knew. Her every word and movement of her face and hands remained so vividly in my memory.

She paused for a moment, and then asked: "Bebinam, shomaa sedaaye musike mano mishnavin?" I wanted to say how much I actually looked forward to it, and how her music, and her occasional tribal dance across her living room, was the only part of the day I looked forward to. But I didn't."Aareh ba'zi moghehaa," I replied.

I smiled. She was such a world of innocence, feistiness and charm. I told her how she had no chance of convincing her mother and the "kapak zadehaa," and she'd better give up.

"No way. I'll teach them a course in modern music!" she replied with determination.

I wanted her to sit there the whole night and talk about her misgivings, but her mother opened the door at the other side of the building and shouted her name angrily: "Shirin, Shirin, yaalaa biyaa, ghazaa ro keshidam."

She smiled, wiped her face again, said good-bye and disappeard, first in the darkness of the walkway and then behind the doors of her apartment.

I still sit outside at nights, and she occasionally blasts the music so loud that I hear my neighbors' teeth chatter. Oh sweet rebellion.

* Other articles by Ramin Tabib:
The aftermath in human terms -- Los Angles isn't paradise for all
Simply OUT THERE -- The trials of going to an Iranian concert
Beema'refat (and proud of it) -- No more Mr. Nice Guy
* THE IRANIAN Features section