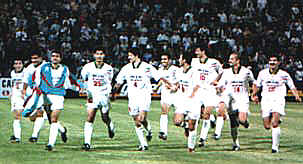 What a wonderful life

For once in a long time I went to work not worrying what happens next. I did not evaluate or re-evaluate the standings table, team points, and goal differences. I'm not thinking "What if Qatar wins over Saudi Arabia next week?"

It's World Cup fever alright. Every four years soccer fever hits the planet. There is no cure for it, no soul can escape it. Wives mark this period knowing they won't have a husband. Children love it knowing dad will take them to every game or sit with them and watch every live match on TV. Countries have gone to war over the World Cup (El Salvador, 1970). Nations have mourned and closed shops (England, 1974). Psychologists around the world have already given up. This is World Cup mania and soccer rules the world.

And now Iran is feeling the excitement too. For the first time in twenty long years she has a clear shot at representing Asia in the World Cup, which will be hosted by France next June.

Today -- Friday, October 3, 1997 -- I don't have to extend my hands to the gods and pray to angels for a miracle to cause Iran's advancement. Today Iran defeated Qatar by three goals to zip in Tehran. Meanwhile, Saudi Arabia, Iran's main rival in the race for France, was humbled by China, with a goal on a header from a Chinese forward.

What this meant is that one week before the completion of Round One of the World Cup qualifying tournament, Iran has taken the lead with eight points in Asia Group One. Kuwait, Saudi Arabia, Qatar and China are the other four teams in the group, with Kuwait and Saudi Arabia chasing Iran from second and third positions. They still have one more game to play, but Iran is already at the top of the group.

Round Two will start on October 17. The team with the highest points (combined Round One and Round Two) will secure a trip to Paris this coming summer. Only 32 teams in the 192-nation FIFA will be granted the honor to enter France to participate in the 16th World Cup.

For once, I don't have to run the prediction program on my computer to find out the chances of Iran seeing the gates of the Seine River. For once, Iran won like "bach-che-ye adam," and Saudi Arabia lost as we wished her to.

I noticed the air smelled different today when I got into my car -- it was fresh. At work, I even felt I liked my job! My computer programs didn't crash. All web pages got loaded accordingly. Heck, I even managed not to take a nap at the Friday afternoon staff meeting!

In my relaxed state of mind, I could hear Shahram and Ebi singing "Chili Boom, Boom, Boom" broadcast in Tehran's 100,000-capacity stadium mixed with Mamad Booqi's cheering horns. That was the "stage" before every home match during the 1978 World Cup qualifiers. It has been a long twenty years.

And as my friend and football fan Jeyhoon put it perfectly, I could see the tip of the Eiffel Tower from my bedroom this morning. For once, life is such a wonderful thing.

Let us hope we will not be humiliated like we were four years ago when in the soc.culture.iranian newsgroup (SCI) we resorted to calculating chances for Iran's entry into World Cup USA 94. I recall a soccer fan had calculated that Iran could have made it only under one condition: that all the last three games end in specific goal scores. Then and only then Iran would have qualified. I will never forget that depressing moment in my life. I will not forget the sense of despair in SCI that day.

Today I yelled "Ali-e Daei... Jam-e Jahani..., Ali-e Daei... Jam-e Jahani... " while going through the usual stop-and-gos in Palo Alto (California) on Highway 101. And the funny thing was that it all seemed okay. I didn't have to worry about the other drivers' reaction to my unusual behavior. They understood. It's World Cup fever! The wave is hitting everywhere in the world.

Life is such a wonderful thing. At least it looked that way today. And, that's the way it was on this Friday, October third, nineteen ninety seven.

Hooshyar Naraghi is the founder and webmaster of Sportestan, the Iranian sports home page.