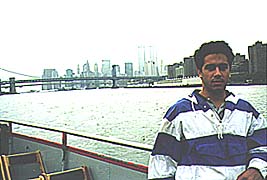 By Shahram Sharif
September 1997
The Iranian

"Do you feel at home here?" I'm sure every Iranian living abroad has been asked this question, probably more than once.

The first time I was asked was about ten years ago. I was thirteen and had just left Iran to start a new life with my family in Paris. Of course my answer was "No." How could I feel at home in a new country without my friends around me, without understanding the language, without knowing the customs and habits, and most of all with the knowledge that somehow we are not very welcome.

I was a foreigner. I was born and raised in Iran. All my memories and friends were from Iran. No, Paris did not feel like home. It took a year before I started to get used to the new environment I was in. I had found some new friends, spoke the language, and understood more about the people. But still it didn't feel like home.

Then we moved to Holland. I had to start all over again. New people, new language, new culture and customs. Again I was reminded of being a foreigner. It was actually very strange when we went to France after a couple of months for a visit. It felt like I was going back home, but not completely.

I was trying to adapt myself to Dutch customs, thinking I would be more accepted, thinking I wouldn't be looked at as a foreigner. Some were even surprised when I told them I wasn't born in Holland. I started to act more "Dutch" than the Dutch!

Holland started to feel like home. Sometimes I was even more comfortable being around the Dutch than Iranians. I didn't think about Iran anymore. I wasn't sure how I was supposed to act when I met new Iranians. When I was asked whether I felt at home in Holland I would say "Yes. " At this point I even knew more about Holland than about Iran.

Then there was another change. About two years ago I realized that no matter how hard I tried to make Holland my home, it would never work. I will always be a foreigner, no matter how fluently I speak the language, how well I understand Dutch culture and how well-accepted I become to most of the Dutch people.

I started to appreciate Iranian culture and habits. I started spending more time with Iranians and realized that the kind of friendship that could exist between Iranians was unique. This could of course be very subjective, but I've found that many would agree with this.

Today when I ask myself "Is this home?" or "Do I belong here?" my answer is "No, not really." But where is my home? I don't really know. In Iran? I wouldn't know. It's been such a long time. A lot has changed there. Wouldn't I feel like a foreigner in Iran?

During a visit to the U.S. last year I was asked if I ever felt homesick. I couln't really give an answer. I have to know where my home is before I could feel homesick. Where is my home? Everywhere and nowhere. Anywhere I feel safe, accepted, understood and welcome.

Web Site Design by: Multimedia Internet Services, Inc. Send your Comments to: [email protected] Copyright © 1997 Abadan Publishing Co. All Rights Reserved. May not be duplicated or distributed in any form.