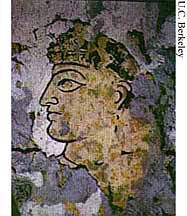 The treasures of Lake Hamun

Last November I bumped into my friend Soroor Ghanimati, who is a doctoral student in Near Eastern history and archaeology at the University of California, Berkely, at a book signing ceremony.

Since by now she had been accustomed to my inquisitiveness, she had a quick answer to my question about her latest archaeological adventure. "I went to the most incredible site in Lake Hamun, called Kuh-e Khwaja. Wait until you see these amazing pictures."

Here are the pictures

Intrigued, I arranged a time to discuss her trip and research. The following is a summary of that meeting.

Q: First, give the readers a brief background about yourself.
A: I was born in Tehran and studied three dimensional design at Tehran Art University. After coming to the United States, I completed my graduate studies in architecture and was a practicing architect for 15 years.

At the present time, I am preparing for my Ph.D. exams at U.C. Berkeley, in the history of Near Eastern art and archaeology with an emphasis on Iranian architecture during the Late Antiquity (5th, 6th and 7th centuries A.D.) and the Medieval periods (8th and 9th centuries A.D.).

Q: How did you hear about the Kuh-e Khwaja site and what exactly is your area of research?
A: I became interested in the Kuh-e Khwaja complex in Sistan, while conducting research on the art and architecture that characterized eastern Iran, on the southern branch, of the great Silk Road.

I have been working on this subject under the supervision of Professor Guitty Azarpay, Professor Emeritus at U.C. Berkeley's Department of Near Eastern Studies -- the renowned Iranian and Central Asian art historian -- for the past four years . I was really fortunate to participate in the field survey of the site in 1995.

The expedition was supported by grants from the University of California. I was a member of the expedition arranged by the Cultural Heritage Foundation of Iran.

Q: Where is the site located? Can you give us a brief description of it?
A: The site of Kuh-e Khwaja is located 30 kilometers southwest of Zabol in the eastern part of Sistan-Baluchestan Province, very near the Afghan border.

The main ruins of the complex are situated on the southeastern promontory of a high hill overlooking the marshes of Lake Hamun in the delta where the ancient Hirmand River's journey comes to an end. This solitary high hill, or small mountain, juts out of the lake and for most of the year is an island.

The single path of access to the upper slopes of this hill is through the neglected ruins of this ancient town which was built on the only eroded part of the vertical volcanic ring that isolates the upper reaches of the hill.

You can't imagine my state of excitement as I approached this mysterious mound on my first trip. Ghosts of the citadels had only managed to slow the invasion of the wind and sand. But still there is so much left to tell us.

The complex consists of a remarkable array of buildings and fortifications. For example, the citadel known as Ghagha-Shahr houses one of the only surviving fire temples within a major monument of pre-Islamic times. This temple is located on a terrace beyond high walls. It is protected by two forts, whose remains are known as Kok-e Zal and Chehel Dokhtaran.

And as a structural complex with an intriguing range of Zoroastrian associations, Kuh-e Khwaja represents a unique repository of still inadequately documented architectural information, especially with reference to the transition from Sasanian to Islamic architectural forms.

In addition, the site was decorated with large murals depicting various figurative motifs and mud reliefs of human and equestrian figures. Some fascinating surviving pieces are housed in various museums such as Iran-e Bastan Museum in Tehran, New Delhi Museum, Berlin Museum, and the Metropolitan Museum of Art in New York.

Farther up the hill and beyond the fortifications, on top of the plateau, other various unrelated structures exist. Probably of the Islamic era. Their function, as of yet is undetermined.

Q: What are the oldest known sources that refer to this site?
A: Locating "primary" sources is still an active area of my research. There are many sources, that through the process of deduction, one could infer references to Kuh-e Khawja.

But up to now, the only direct reference is to be found in the anonymous Tarikh-e Sistan (History of Sistan) which dates back to the twelfth century AD. In there, mention is made of the shrine of Khawja Ali, a descendent of the Prophet Mohammad. The mountain takes its name from this shrine which is located on the opposite side of the mountain, curiously, almost as far away from the complex as possible.

Interestingly, on religious holidays and occasionally on the weekends, the tomb is visited by pilgrims who, in order to get to the summit and hence to Khawja Ali's tomb, have to pass through the deserted alleys, and climb over the crumbling walls of the old town. Since it is through the complex that the rest of the hill is accessed.

The ruins themselves are referred to by the locals as Qal'a-e Kafaran (Fort of Infidels), and sometimes as Qla'a-e Sam (the Fort of Sam, the father of Ferdowsi's mythical Rostam). Both labels attest to a lingering pre- Islamic memory of the site.

Q: Tell us a little bit about the locals.
A: They are warm and friendly, and speak "Sistani". As an example, they use the word "Sisto" instead of "Sistan". When they speak slowly, I can understand a word now and then, but when they speak at normal speed, forget it!

Primarily, like their ancestors they farm the fertile Hirmand Delta and fish the lakes. In their villages, due to the heat, mud domes are used extensively in the construction of their habitat, creating a harmonious and organic landscape.

The children, naturally, are the most curious and are always full of playful questions.

Q: In modern times, who has tackled this site?
A: In 1910, G.P. Tate of the British Boundary Commission made detailed observations of the site. Then in 1915 Aural Stein was the first to conduct surface excavations. The results were published in his Innermost Asia in 1916 and subsequently, a later addition was published in 1928.

He was the first to identify that the fire sanctuary was the principal architectural unit of the Kuh-e Khawja complex. The fire temple had been covered extensively with wall paintings, which were discovered at the time of the excavations and were taken to the museum of New Delhi.

Ernst Herzfeld (One of the persons who excavated Persepolis) inspected the site in 1925 and 1929. His findings were first published in 1932, and with a radically different conclusion in 1941.

I should mention that Herzfeld had not published all of his documents in 1941. These records, which have been part of the Freer Gallery's collection, became the basis of a new report by Trudy Kawami which was published in 1987 (Metropolitan Museum Of Art Journal #22, 1987). Then in 1961, the site was examined for a third time by Giorgio Gullini, who published his results in 1964.

I don't know about tackling, but in my case you could say I've grabbed hold of a corner of a shirt. It's really an enormous subject.

Q: What was the importance of this site?
A: In the first millennium A.D., the site was a major stop on the southern branch of the Khorasan highway, the southern Iranian part of the Silk Road, providing shelter and protection to the passing caravans. Possibly it was the hub of local trade as well.

At first, Chinese raw silk was transported on this route. Later, from the second century A.D. onward, Indian goods such as precious stones, perfumes, opium, spices, and even eunuch slaves flowed in the direction of the West. In the opposite direction, Persian Gulf pearls, wheat, barley, turmeric, asafetide, and herbal medicines were carried by the caravans.

But aside from trade, Sistan, known as the birthplace of Rostam, has very strong associations with Zoroastarianism. In fact, according to Zoroastrian mythology, Lake Hamun was the keeper of Zoroaster's seed. And when the world's end is at hand , three maidens will enter the lake, and afterwards will give birth to the Saoshyants who will then be the "final saviors" of mankind.

According to the imminent Iranist Mary Boyce Lake Hamun was also a center of pilgrimage. The only other known location for pilgrimage in Zoroastrian times was Ray which is close to Tehran.