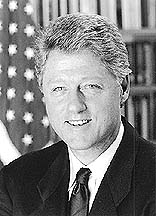 Clinton: "Let's put the past behind us."

The following was published in The Iranian on April Fool's Day, 1997. Click here to see readers' reactions.

The White House
Office of the President of the United States of America
Washington, DC

We are blessed to be living in a world that is much safer compared to only 10 years ago. The fall of communism in Russia and Eastern Europe has sharply reduced fears of nuclear war. Democracy, capitalism and free trade have never been so widely accepted throughout the world. Satellites, personal computers and the Internet are extending the barriers of knowledge, eliminating borders and distances, and creating a better understanding of diverse cultures.

Still, there are many international issues and conflicts we need to face and deal with in order to minimize threats to our national security. I am sure many of you are familiar with ethnic tensions in former Yugoslavia and now in Albania. There are conflicts simmering in the former Soviet Union and parts of Africa as well.

But what I would like to talk to you about today is the delicate situation in the Middle East and how we are working to end deep-rooted conflicts in this sensitive part of the world that holds most of the world's energy resources.

Since the day I took office a little more than four years ago, my administration's policy toward the Middle East has been to continue supporting the peace process between Israel and the Palestinians. We continue to strongly support this process today and will do so in the future because there are no other alternatives other than war and bloodshed.

But we should do more than encourage Israeli and Palestinian leaders to resolve their differences peacefully. We must also actively discourage and stop those who want to destroy the peace process. Who are the enemies of the peace process? They are the religious extremists who recently massacred Israeli school children and assassinated Prime Minister Rabin.

Let the enemies of peace know that we will not allow hatred and prejudice overcome reason and compassion. The United States will firmly defend its friends and allies against terrorism and extremism which have manifested in the name of religion.

Also, we will do all we can to strengthen ties with our regional allies and reduce tensions with others, including Syria, Jordan and Iran. Syria and Jordan have embraced the peace process and are carrying out negotiations with Israel to end long-standing disputes. Iran, however, has not lent its support to efforts to bring lasting peace in the Middle East. On the other hand, Iran has toned down its rhetoric, has resumed low-level contacts with Egypt and re-established ties with PLO Chairman Yasser Arafat.

There has been a lot of speculation regarding the possibility of renewed official contacts between our government and the government of Iran. I am now prepared to let you know that American and Iranian officials will soon sit down and talk face to face for the first time in 17 years. We have concluded that reducing tensions with Iran could indeed help the peace process.

Before I explain how this important development came about, I would like to emphasize that serious differences remain between the two countries. We continue to regard Iran as a sponsor of terrorism; we continue to oppose Iran's plans to build weapons of mass destruction; we are still concerned about Iran's poor human rights record; and we will continue to block any attempt by Iran and its allies to disrupt the peace process.

However, holding direct talks could at least give us the opportunity to discuss these serious issues with the Iranian authorities and rebuild a level of diplomatic interaction that is necessary to avoid unwanted misunderstandings and confrontations in a volatile region such as the Middle East.

It also opens the possibility of normalizing relations between two great nations. Resumption of trade and investment could follow, which could bring a gradual shift from revolutionary extremism to moderation both in domestic and foreign policies. We have seen the moderating power of commerce in such countries as China, Vietnam and North Korea. We could see it in Iran as well.

But why do I think the time has come for a thaw in U.S.-Iranian relations?

There were also some personal gifts. I received a khaki turban with matching robe from Tehran GAP; Hillary got a great satin chador featured on the cover of Shahrzad's Secret catalog, and Chelsea got the European Community's limited edition "Constructive Dialogue with Iran" gift box packed with Chanel No. 1979 perfume, Hermes Angelic Verses silk scarf, Belgian oil drum chocolates and a Swiss Revolutionary Guards knife.

The second package was for Socks, we assume. In it there was a red, white and blue Persian pussycat.

The Central Intelligence Agency has assured me that the gifts are genuine and show a real desire by Iran to open dialogue with the United States. I have conveyed my appreciation to the Iranian government and hope that this will lead to a new and happy chapter in the long relationship between the two countries. It is time to put the bitter past behind us.