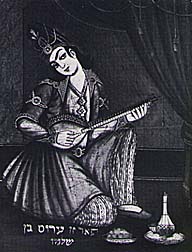 From "The Jews of Islam" by Bernard Lewis (Princeton University Press, 1984). Pages 181-183. Also see "Weathering the storm" about Jews in present day Iran.

The Jewish traveler J.J. Benjamin, who traveled in Iran at mid-[19th] century, summarized the misfortunes of the Persian Jews under fifteen headings:

1. Throughout Persia the Jews are obliged to live in a part of the town separated from the other inhabitants; but they are considered as unclean creatures, who bring contamination with their intercourse and presence.

2. They have no right to carry on trade in stuff goods.

3. Even in the streets of their own quarter of the town they are not allowed to keep any open shop. They may only sell their spices and drugs, or carry on the trade of a jeweller, in which they have attained great perfection.

4. Under the pretext of their being unclean, they are treated with the greatest severity, and should they enter a street, inhabited by Mussulmans, they are pelted by the boys and mobs with stones and dirt.

5. For the same reason, they are forbidden to go out when it rains; for it is said the rain would wash dirt off them, which would sully the feet of the Mussulmans.

6. If a Jew is recognized as such in the streets, he is subjected to the greatest insults. The passersby spit in his face, and sometimes beat him on unmercifully, that he falls to the ground, and is obliged to be carried home.

7. If a Persian kills a Jew, and the family of the deceased can bring forward two Mussulmans as witnesses to the fact, the murderer is punished by a fine of 12 tumauns (600 piastres); but if two such witnesses cannot be produced, the crime remains unpunished, even though it has been publicly committed, and is well known.

8. The flesh of the animals slaughtered according to Hebrew custom, but as Trefe declared, must not be sold to any Mussulmans. The slaughterers are compelled to bury the meat, for even the Christians do not venture to buy it, fearing the mockery and insult of the Persians.

9. If a Jew enters a shop to buy anything, he is forbidden to inspect the goods, but must stand at a respectful distance and ask the price. Should his hand incautiously touch the goods, he must take them at any price the seller chooses to ask for them.

10. Sometimes the Persians intrude into the dwellings of the Jews and take possession of whatever pleases them, should the owner make the least opposition in defence of his property, he incurs the danger of atoning for it with his life.

11. Upon the least dispute between a Jew and a Persian, the former is immediately dragged before the Achund [religious authority], and, if the complainant can bring forward two witnesses, the Jew is condemned to pay a heavy fine. If he is too poor to pay this penalty in money, he must pay it in his person. He is stripped to the waist, bound to a stake, and receives forty blows with a stick. Should the sufferer utter the least cry of pain during this proceeding, the blows already given are not counted, and the punishment is begun afresh.

12. In the same manner the Jewish children, then they get into a quarrel with those of the Mussulmans, are immediately led before the Achund, and punished with blows.

13. A Jew who travels in Persia is taxed in every inn and every caravanserai he enters. If he hesitates to satisfy demands that may happen to be made on him, they fall upon him, and maltreat him until he yields to their terms.

14. If, as already mentioned, a Jew shows himself in the street during the three days of the Katel (feast of mourning for the death of the Persian founder of the religion of Ali) he is sure to be murdered.

15. Daily and hourly new suspicions are raised against the Jews, in order to obtain excuses for fresh extortions; the desire of gain is always the chief incitement to fanaticism.