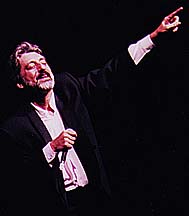 Written and photographed by J. Javid
December 30, 1997
The Iranian

It was a show I would have missed under normal circumstances. Going to an Ebi concert would not have been high on my list of to-do things on a Saturday night. But as a matter of curiosity, that's exactly what I did last Saturday night.

I didn't expect much. In my mind, Ebi was a second-rate pop singer, even though I had never really listened to any of his albums. I thought he was just one of the many less-talented singers who had left Iran after 1979. And worst of all, I thought, Ebi's fans were of a certain type -- soosool tehrooni? -- which I'd rather not be around. I may be a soosool Abadani, but...

We had good seats in the fourth row. The San Mateo Performing Arts Center, just south of San Francisco, was almost packed. There were probably more than a thousand people there -- all Iranian, of course. There were just as may men as women. It was a pretty good mix, as far as their "type" was concerned. I didn't find many teenage girls with excess make-up bursting with excitement, or teenage boys looking cool under a thick layer of grease. Just a lot of cheery middle and upper-middle class people.

What was most surprising to me, though,was Ebi himself. With each song my suspicions eroded until I became a believer in his brilliant talent as a singer and entertainer. He not only performed beautifully with his warm, scratchy voice, he was also charming, cheerful and a real crowd pleaser, often stopping to allow people to sing along, which most did word by word.

Here are some photos from the show. Click on the images to see larger photo.