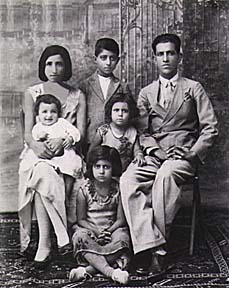 Iranian-Americans: Five of the six came to
the U.S. and became citizens. Four live in the U.S.

From A. Mollabashy, MD, the founder of Persian Watch Cat, the Iranian-American Anti-discrimination Website.

Why have a small group of busy professionals chosen to devote time to the cause of defending Iranian-Americans against discrimination? The answer is simple: regardless of the international political environment, discrimination and misrepresentation are unjust. To discriminate against someone based on his/her race, ethnicity, religious background, and yes, even based on the perceived foreign policy of a third party, is not logical, nor does it have any moral justification.

This is where the Persian Watch Cat got started. As my mother and cousin stood in line at the Indianapolis International Airport this past March, my father proceeded to check in his bags at US Airways to catch a flight to Pittsburgh. There he would meet my wife and I, and all three of us would fly to Tehran via Austria to visit my grandmother.

My father has been a practicing anesthesiologist in the state of Indiana for the past 22 years. Two of his children have graduated from Indiana University; one as a physician. He has paid his taxes faithfully, is a registered voter, and has never had a traffic violation. Despite his great and humane personal attributes, US Airways chose to single him out of the crowd and manually search him and his luggage.

Would those who believe the real problem lies with Iran's foreign policy agree that my father should be searched from head to toe, possibly even searched under his tongue? These searches are legitimized by them and the establishment based on the current hostile political environment and on the foreign policy of a third party.

As I listened to my mother tell the story, I realized that in, oh let's say ten years, my son could probably expect the same treatment - not based on who he is, but on the events which unfold in the international political arena.

You see friends, we are lucky. We live in a country where we can be American, and not forfeit being Iranian. Nevertheless, just because we are lucky, doesn't mean we should take our good fortune for granted.

Our hope is that the Persian Watch Cat could help our community establish a legitimate and fair-minded consideration of Iranian-Americans as equal members of our society. In doing so, maybe we won't have to explain away these misperceptions to our children. Maybe our children won't have to overcome the cultural handicap imposed on them by the events and injustices of the past two decades.

Am I an ambulance chaser? If it helps my child be proud and uninhibited about his cultural roots, so be it.