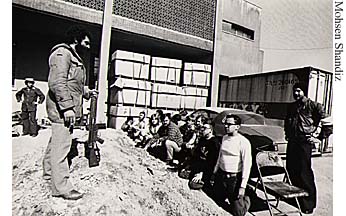 We are a group of concerned Iranians that believe that a dialog between the US and Iran will decrease tension and increase the chances of a positive development inside Iran. We also believe that the US sanctions against Iran are counterproductive and only hurt our people, instead of the clergy.

We have drafted a petition that urges the U.S. to lift the sanctions and commence a dialog. We aim to send it to ALL members of congress in the next coming weeks.

Please take a look at it, and if you agree, please fill the petition form. Also, please do distribute it to EVERYONE you know.

If you have any questions, please do not hesitate to contact us at the above address.

We freedom seeking Iranians, Iranian-Americans and sympathizers with the suffering people of Iran, oppose the sanctions the United States of America has imposed on Iran and favor a U.S.-Iran dialog for the following reasons.

As it has been shown throughout history, the primary victims of trade sanctions are the segments of the population one least wants to harm -- the poor, the young, and the elderly. The suffering of the Iranian people is already immense under the tyranny of the Ayatollahs. There is no sense in making it greater.

A distinction between the Iranian people and the Iranian regime is long overdue. Aiming at sabotaging the Iranian economy will in the end only hurt the Iranian people who are not accessories to the deeds of their undemocratic regime. Similar economic sanctions have failed elsewhere. For example, seven years of rigorous sanctions against Iraq has unfortunately not caused a change in government, only immense suffering on the people.

Furthermore, the D'Amato bill and similar U.S. policies are used as evidence by the Iranian regime that U.S. objectives include the undermining of the Iranian economy and the livelihood of all Iranians. It provides the regime with political legitimacy. The regime is able to deflect criticism by pointing to an "external enemy" intent on circumventing the economic welfare of Iran. Targeting the Iranian economy as a whole only serves the interests of the hardline elements in the Iranian regime.

The second victim of Washington's senseless Persian Gulf policy has been the American citizens. Studies have shown that the U.S. economy has lost between $15-20 billion in 1995 only. That is a loss of American companies, American jobs, American income...

Meanwhile, the regime in Tehran has remained virtually unaffected.

Furthermore, Washington's counterproductive and extraterritorial embargo has infuriated U.S. allies who share the U.S.' concern regarding Tehran's behavior, but prefer a different line of action. This political cost further demonstrates the irrationality of this policy.

During this eventful decade, we have been witnessing the power of dialog. More and more conflicts are being solved through dialog. It is time that the U.S. and Iran held talks on all outstanding issues between the two. For the past several years both Iran and the U.S. have stated their willingness to hold talks, but only if certain conditions were met. This inflexible stance has only resulted in stalemate. We ask the U.S. to conduct a more flexible policy. Good begets good, and scrapping the sanctions would be a distinct confidence building measure that would facilitate the prospects of talks.

There are elements within Iran seeking to add to the historical contributions of Iranians to human development, to cease the behavior the U.S. finds unacceptable and to democratize Iran. The U.S. should reach out to these elements and facilitate their struggle. The U.S. sanctions do the exact opposite, they only fuel anti-Western feelings amongst the Iranian people and prolong the enmity between the two countries.

More and more experts are raising their voice against this senseless policy. Brzezinski, Scowcroft, Murphy, Chomsky, Laingen, Sick ... the list is long indeed. It is time for the U.S. government to listen to its most knowledgeable foreign policy experts.

Resolving the disputes between Iran and the United States would pave the way for the solution of one of the U.S.' top priorities in the post-Cold War international arena -- peace in the Middle East. The U.S. has invested billions of dollars in this endeavor and needs to use every possible channel of influence to secure a just and durable peace in the region.

Through dialog, the U.S. and Iran can come to an understanding on this issue. Lifting the sanctions would indeed be a step in the right direction for peace.

We hereby call for the lifting of the counterproductive Iran-Libya Sanctions Act and urge the U.S. to considerably increase its efforts to commence a dialog with Iran.

Please sign the petition form below. The petition will be handed over personally to every Congressman in Washington DC.

Web Site Design by: Multimedia Internet Services, Inc. Send your Comments to: jj@iranian.com. Copyright 1997 Abadan Publishing Co. All Rights Reserved. May not be duplicated or distributed in any form.