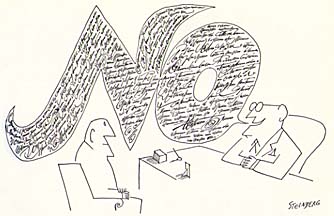 By Steinberg. Courtesy, The New Yorker

A spontaneous discussion that transpired in the aftermath of a panel discussion on changing Iranian identities struck a chord of seeming cultural contention. It was a discussion on Iranian Jewry and the tendency for Iranians to question the national allegiances of Iranian Jews. "Iranian or Jewish?", they ask.

The discourse developed at the recent seminar organized by the Society for Iranian Studies in Bethesda, Maryland, with the sponsorship of the American Institute of Iranian Studies. The last panelist's topic of presentation was "Ethnicity and religion: Maintaining Iranian Jewish Identity." She ended her discussion by paraphrasing what she said was the collective sentiment of Iranian Jews on the issue of not being accepted by Muslim Iranians: "We were there before Islam," she declared. As she sat down applause rose from the audience. Apparantly there were quite a few Jewish members of the Iranian community in the audience.

"Jews have been in Iran for 2,700 years. That's ninety generations ago! Why do you still not accept us as Iranians?", demanded one vociferous member of the audience standing in the back of the crowded room. "Our parents had two names, one Persian and one Jewish," recalled another member of the audience, and added, "In our generation, we only have one name... a Persian one." Some audience members concurred as she continued. "Sometimes in America, Jewish people ask me what my Hebrew name is and I say I don't have one. They're surprised. We've done everything," she proclaimed. "It's you, the Muslims, who don't accept us."

One young woman, a poet, who had driven all the way from Connecticut to attend the seminar in Maryland said, "I want you to know this is becoming very therapeutic." As she drew laughter from the crowd, she went on to forcefully make her point. "We speak Farsi better than we speak Hebrew, we listen to Persian music, we rejoice at Noruz, which is not the Jewish celebration of the New Year but a Persian one, but still we're accused of having mixed allegiances." She added that her volition to drive from Connecticut to Maryland for a cultural conference on Iran should demonstrate her allegiances.

Seeking to make some peace, one bearded gentleman with a congenial tone stood up to share a childhood memory with us. He recalled that as a Muslim child born to Muslim parents, he was sent to a Jewish school in Tehran. When the Jewish children had Torah lessons , he recalled, the Muslim kids would be sent out for recess, and their Jewish mates were all jealous. "One day," he recalled with a smile, "I came home and said to my mother, 'Mom it's a holiday tomorrow, we don't have school.' My mother thought a little and said, 'what Holiday?' I said 'Mom, It's Purim tomorrow!'" Again the release of laughter came from the crowd. "So the relationship between Jews and Muslims was congenial," he concluded.

"Why shouldn't it have been congenial?" rebutted another member of the audience. Their was no reason why it shouldn't have been because "the Jews are such masters at being minorities" that they "made an effort to keep their Jewry in the background," in order to fit into Persian society. She speculated that perhaps there was some "resentment" from the Iranian Jewish community that they were forced to act this way in order to attain the acceptance from Muslims, that to this day, alludes them.

Leah Baer, the independent scholar that presented the paper concurred.

As the cycle of tension to comic relief began to rebound again, one audience member standing in the back of the now packed room proclaimed, "We're the invisible. We're invisible from Iranian history, Iranian literature, Iranian culture and Iranian society; yet we have made every effort, to assimilate. Isn't it time to look at us?" "Politics," said a faint voice from the distance. Heads began nodding in affirmative unison.

"There's no democratic conception of Iranian identity," claimed one audience member attempting to diffuse the deadlock. The Iranian identity, he explained, is not defined as one set of rules. It is a definition of allegiance, circumstance and proclamation. "We don't accept Iranians as just Iranians, we judge them by their accents, their beliefs, their language skills, and yes even their religion," he charged. "This is why the question of allegiance arises as related to Iranians." Afsaneh Najmabadi of Barnard College, a speaker herself, offered her alternate viewpoint. This is a "troubling" question, she said, that no other minority demands an answer to. "It indicates a prejudice," she said. That response drew the ire of one audience member who walked up to the podium to voice her disappointment that the issue had just been termed as an example of "prejudice" by a "scholar."

The tension was rising again until one woman got up to share her own story. "Years ago in Tehran", she began, when she and her brother were children, they had gone to a gathering where Jews were on one side and Muslims on another. Her brother, she said, had particularly Muslim features. As he went to cross over to the Jewish side from the entrance, a doorman stopped him. "I'm Jewish," he told the doorman. "No you're not," said the doorman ushering him over to the Muslim crowd. Finally he pleaded, "Agha beh Ghora'an-e-Majid, Jouhoudam!" ("I swear to the Qoran, I'm Jewish!")

Cries of laughter arose from the crowd. In the end it was clear that the Jewish community has an Achilles Heel on the issue of "inclusion." Muslim Iranians in the crowd, for their part, seemed genuinely interested in the issue and were even receptive to suggestions on how to break the historic habit of alienating their Jewish compatriots.

The panel had now gone half an hour over its time allotment for that room. So on an ending note one audience member asked the chair of the panel, Houri Berberian, an Armenian, "Now that this has become a vetting session of minority qualms, tell us Madame Chair, what are your thoughts as an Armenian Iranian...?