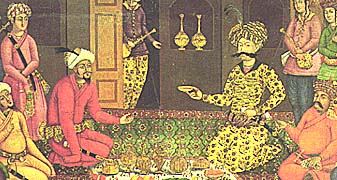 A minimum of good will

From "The Oil Deal With Iran" by Henry Kissinger, distributed by the Los Angeles Times Syndicate and published in The Washington Post (October 28, 1997). The writer, a former secretary of state, is president of Kissinger Associates, an international consulting firm that has clients with business interests in many countries abroad.

Almost from its beginning, the Clinton administration has declared the fight against state-sponsored terrorism as one of its principal goals, in the pursuit of which it has declared an economic embargo against Iran.

This policy is now being challenged by the contract of the Total Oil Group of France to develop an oil field in Iran. The largest foreign venture in Iran since the 1979 revolution, it includes as well Gazprom, Russia's energy monopoly, and the Malaysian energy company.

That the French prime minister officially "rejoiced in" the deal and that Gazprom is part of it suggests that an American ally and an American strategic partner either do not take state-sponsored terrorism seriously or that they place their immediate economic interests above long-range stability in the gulf and, indeed, in the Islamic world. From that point of view, Malaysia's participation, preoccupied as its leader is with his own eccentric view of the Southeast Asian financial crisis, poses less of an overall challenge.

The French decision confronts the United States with a fundamental choice: to enforce the embargo or to abandon it by acquiescence. In an attempt to square the circle, France and some NATO allies like Germany have justified their economic dealings with Iran as a means to conduct a "critical dialogue." They claim to be encouraged by the election of Mohammad Khatami -- a presumed moderate -- as president of Iran. Yet they are unable to describe a single positive result: No dialogue, much less a critical one, has taken place; it is, if anything, a dialogue of the deaf.

Alternatively, our European allies tend to present their separate approach to Iran as defiance of American extra-territorial legislation, by which Congress has legislated reprisals against countries for actions undertaken outside the territorial limits of the United States. However, the real issue is not the legal basis from which America conducts its Iranian policy but its inherent merit.

The desirability of improving relations with Iran is not at issue. Iran's large and talented population, its considerable resources and its geographic position all destine it to play a vital, in some circumstances decisive, role in the gulf and in the Islamic world. This is why, when in office, I treated Iran as the linchpin of our gulf policy.

American policy also needs to be concerned with the difficulty of preserving stability in the gulf. In precarious alliance with Saudi Arabia, we are confronting the two most powerful states in the region -- Iran and Iraq -- while, in both the United States and Germany, there are serious domestic obstacles to close association with Turkey, the other relevant regional power.

Finally, an embargo against Iran involves the practical long-term danger of closing off the most efficient route for transporting oil from Central Asia to world markets. That makes it likely that the vast majority (if not all) of the pipelines from these vital regions will have to go through Russia, giving Moscow a stranglehold should either the growth of industrial production around the world or political upheavals in key oil-producing states lead to another energy crisis.

A prudent American government therefore needs no instruction from allies or strategic partners about the importance of improving relations with Iran. Indeed, I would be amazed if the administration were not already actively exploring such opportunities. The question is whether abandoning sanctions or acquiescing in their being flouted achieves this goal.

Unfortunately, the problem is not lack of commitment to improved relations with Iran but the absence of a shred of reciprocity on Iran's side. Iran's domestic institutions are not the obstacle to improved relations. The threat to world stability is Iran's dedication to an expansionist theological foreign policy backed by reliance on terrorism and subversion.

Since the overthrow of the shah in 1979, the ayatollah-based regime has engaged in a series of actions in violation of accepted principles of international conduct. It is impossible to think of a single constructive contribution that Iran has made to international stability since the ayatollahs have taken over. In the 1970s it held 50 American diplomats hostage for 14 months. Throughout the 1980s, organizations financed and supported from Tehran were responsible for the kidnappings of Americans and other Westerners in Beirut. The Tehran regime is closely linked with and also finances camps in the Sudan for training terrorists. Evidence exists linking Iran-sponsored groups to the bombing of the American military barracks at Khobar Towers in Saudi Arabia, which killed 19 Americans last year. In France, a senior Iranian living in exile was assassinated by Iranian agents who were then released from prison in exchange for a French hostage held in Beirut. The Iranian ayatollahs have pronounced a death sentence -- reaffirmed by every succeeding Iranian administration -- on the author Salman Rushdie, who, as a result, is under 24-hour British protection.

Beyond these individual acts, Iran does its utmost to oppose the Middle East peace process. Tehran is the patron of Hezbollah, which kidnapped Americans in the 1980s and continues armed opposition to peace with Israel. Iran provides substantial financial support to Hamas and the Palestine Islamic Jihad, both of which regularly claim credit for attacks on Israeli civilians.

The outlook is all the more serious because the Iranian regime is now building with some Russian and Chinese help long-range missiles capable of striking the Middle East and most of Central Europe. Finally, Iran is developing a nuclear capability assisted by dual technology from the West and Russian and Chinese equipment.

Do our allies fail to understand the threat posed by the current Iranian regime to regional and global stability? They surely know that they are not dealing with a "normal" regime. But why should unilateral concessions in the face of unchanged Iranian policies cause Iran to modify its stance?

Explanations for these attitudes are plentiful. There is the proposition that unilateral Western steps will somehow remove Iranian suspicions and ease the way to a more constructive relationship. There is the appeal to encourage the allegedly moderate new President Khatami.

The first proposition applies politically correct psychiatric theory to politics: The perpetrator of a crime is perceived as the victim on the ground of alleged pressures which deformed him. But this theory is absurd when applied to Iran's unilateral provocations. Steps of the magnitude of the Total deal (not to speak of America's abandoning the sanctions) are much more likely to reinforce Iran's present course than to moderate it. Why change when the declared victims are so eager to do business? What is the price being paid for subversion and terrorism?

There is little doubt that, with respect to domestic policies, Khatami is probably more moderate than some of his predecessors. But so far there is not a shred of evidence that this moderation extends to the international scene or that Khatami will be permitted to execute a change of course if it does. It is as likely that Khatami will purchase maneuvering room in domestic reconstruction by demonstrations of ideological vigilance on the international scene. And he will surely do so if the West abandons the pressures that produced whatever moderation exists.

The debate should move beyond theoretical speculation. The desirability of improving relations with the Islamic regime is not at issue. But it seems elementary to link such improvement to abandonment of the export of revolution by force and subversion, a curb on terror and an end to interference in the Middle East peace process. Simultaneously, progress must be made with respect to the acquisition by Iran of missiles and nuclear weapons. There will be no shortage of serious intermediaries for a genuine policy of improving relations. And, with a minimum of good will, a series of reciprocal parallel steps could surely be devised to achieve a dramatic improvement.

Why then are we having such difficulty achieving consensus on what seems so obvious? One reason is that the administration has acted as if it were embarrassed about the embargo and has rarely put forward a rationale for it, especially at the highest level. Other countries may therefore not believe we are really serious; they may interpret the administration's embargo policy to be in response to domestic American pressures rather than reflecting a carefully considered policy. And they may fear being left in the lurch if a crisis develops in pursuit of our recommendation. If this is true, a major diplomatic effort to mobilize allies and other countries in pursuit of current American policy regarding sanctions is essential.

If our allies feel that we have not adequately cooperated with them in exploring opportunities for dialogue with Iran, the solution is not to abandon existing pressures; it is to come up with a better diplomatic scenario. Admittedly, Congress has been too profligate with extra-territorial legislation, especially relating to such countries as Cuba where global interests are much less immediately involved. But in the case of Iran, the embargo matters not because Congress has legislated it but because our national interest and, in this case the global interest, require it.

Our European allies will be the first victims of the spread of Islamic fundamentalism and of Iranian medium-range missiles. As a nuclear power, Iran will in the long run prove far more threatening to Russia than to America. And if the gulf blows up, our European allies will be the first to ask for military help and access to our energy supplies to avoid an economic catastrophe.

Foreign policy always comes down to choices. An effective counter-terrorist and counter-proliferation policy requires the willingness to make some sacrifices. Sometimes commercial interests must give way to broader security interests. American leadership is essential to reach this trade-off with respect to Iran. For if alliances or strategic partnerships turn into a free ride, they will not be sustained by public opinion. It would be unfortunate if Iran became the occasion for tensions with allies and strategic partners.

A major effort should be made to achieve a consensus that relates diplomacy to reasonable pressures against Iran. The possibilities of such a course have been demonstrated by China's apparent agreement to stop supplying missile and nuclear assistance to Iran. If allies and partners are serious, a comparable consensus will be found with them. But if we are driven to act alone, countermeasures in defense of what we perceive as the national and global interest are inevitable. For only by a firm and consistent policy can we hasten the day when Iran will be prepared to make the concrete policy changes that will genuinely restore it to the community of nations.