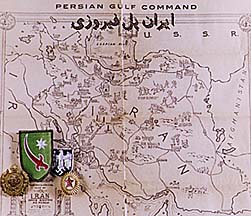 This fascinating documentary tells the story of American servicemen, Soviet officers and civilians who played a crucial role in supplying the Soviet Union with badly-needed military equipment via Iran during World War II.

To learn more about this little-known chapter in the Great War, read Robert D. Burgener's article "Bridge to victory" and see the following cips from the video:

Tales of the Persian Corridor/Bridge to Victory is available for $19.95, plus $3.00 postage and handling.