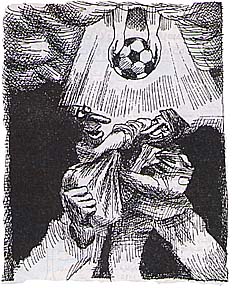 From "Parallel developments in sport and politics," a speech prepared by Harry Edwards, professor of sociology at University of California, Berkeley. The text of the speech was read at a gathering of veteran Iranian soccer players and sports commentators in Berkeley on May 1, 1998.

The "first principle" of sport sociology is that sport inevitably, unavoidably recapitulates and reflects the character, structure and dynamics of human and institutional relationship within and between societies and the ideological values and sentiments rationalizing and justifying those relationships.

Throughout the history of sport in the 20th century this principle has been validated. Within the context of human relations in the United States and South America, for example, as interracial relations improved with the dismantling of segregation and apartheid respectively, racially integrated sports organization and participation blossomed and flourished. Similarly, in the wake of the women's movement in America, the number of universities offering athletic scholarships to women went from 26 in 1972 to more than 526 in 1994.

Parallel developments in the realm of international sport and politics are likewise numerous. Aside from such obvious and blatant political gestures as "ping-pong diplomacy" that signaled the thaw in relations between the U.S. and China, there have been numerous less propagandized developments. The initiation of a prohibition against sports tours involving nations in antagonistic relationships; the acceptance or rejection of invitations to participate in global sports events such as the Olympics or the World Games based upon political relations with the host nation; and the extending or declining of recognition of athletic delegations representing nations controlled by revolutionary or politically unpopular governments.

Of course once set in motion developments at the interface of sports and politics tend to take on a dynamic internal to that of the overall flow and direction of events. So athletic teams on tour provide the occasion for defections. Participation on the world sports stage provide opportunities for demonstrations and personal statements of political disaffection and there are other risks. Just this past month, on April 5th to be exact, the Iranian wrestling team that has just been touring the U.S. was subjected to what the U.S. authorities call an "identity test" which is to say they were delayed more than two hours, fingerprinted, and photographed.

Of course, part of the problem here was confirmation of an old wisdom: Give a little person a little authority and the result is usually a big problem. So some bureaucrat at the Chicago Airport decided to stop this rare group of Iranians in transit just in case they might be up to no good. The situation is also indicative of the extent to which old perspectives and policies tend to persevere even in the face of shifting politics and realities. These things are going to happen on the way to better relations. These are going to be bumps in the road, official communication "glitches" and errors -- particularly in an open society such as the U.S.

But in the final analysis, sports exchanges and international competitions provide perhaps the greatest single opportunity for people-to-people contact and communications -- more so even than music or art because with sports, the fans -- the people -- tend to be so much more actively involved in the creative athletic achievements. Witness the impact that thousands of cheering fans have upon the performances of athletes and teams receiving such adulation. Witness the warm feelings and sentiments expressed by American wrestlers in the wake of being cheered by Iranian fans during recent matches against Iranian wrestlers in Tehran.

Just as African-American athletes led the way to an acceptance of racial integration more broadly in America, just as women athletes are leading the way in ushering in a new era of women's rights and equality in America, athletes engaged in international sports exchanges pave the way for the further normalization of relations and the forestalling of antagonism that lead potentially to confrontations and conflict.

And finally, we should never be so naive as to presume that developments at the interface of international sports and politics extend only to relations between the two nations most directly involved. In the case at hand, there is absolutely no question that U.S.-Iraq relations have directly impacted and thereby given direction and momentum to U.S.-Iranian overtures. As much as anything else this means that the athletic exchanges that the U.S. enjoys with Iran have emerged through a "window of opportunity," not through a sweeping vista of enlightenment.

But, paradoxically, there must also be patience. Change in practice seldom follows change in policy in a timely fashion. Residues of old ways persist and new ways are often regarded with suspicion and distrust.

The basic requirement in all of this is to "keep the faith" -- the faith that American and Iranian people can come to respect each other and each other's motives and aspirations. This is what the these athletic exchanges and competitions are ultimately about, and to this extent they deserve the full support of all concerned -- athletes, people and governments.

* The Berkeley meeting: Photos of a soccer conference, May 1998
* Freedom aborted: On managing the national soccer team

* Sports
* Cover stories
* Who's who
* Bookstore