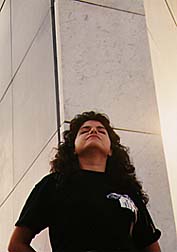 What was it about Paris that I just can't get over? Was it the landscape, architecture, people, cafes, the food, especially the pastry, the cafe creme... Could have been the wine, or maybe it was the atmosphere. As one Iranian friend living in Paris put it, "Living in Paris is like having the best of both worlds -- it's halfway between Iran and America" -- a happy medium between the strict Iranian ways and the casual, easy going, American variety.

I was somewhere in the middle too. I spent five months there in the spring and summer of 1990 at my brother Roger's invitation. And I was surprised that even the Iranians I met didn't figure me out that easily, even though I look very much Iranian. Or so I thought.

I was riding the metro one day by myself and there happened to be two young Iranian men sitting directly across. They started speaking to each other in Farsi about me. I didn't know what to do. The two-minute ride seemed like two hours as they continued to talk about how I looked, etc., etc. As I got off my stop I just said "Khodaa haafez." What fools. Maybe a chador would have given them a clue.

I was born and raised in Iran, have dark hair and complexion, and still I came across to most Parisians as Amegheekaan. And yet here in America, where I have lived for more than 20 years, people are still asking me where I am from "originally."

It was Thursday, June 28th, 1990. My cousin called to say we were meeting Shapour Bakhtiar for dinner. I thought, well what's the big deal? I'll go. I'll get a free dinner out of it. Besides I thought maybe his wife Shaheen would come. I knew her from the good old days in Abadan at the Jockey Club. I used to always think she was so pretty with her beautiful long blonde hair.

Before the rendezvous, my mother called from the States and said I should absolutely not go. She felt it wouldn't be safe. My sister felt the same. I had no clue. I just ignored their comments. Later when Bakhtiar was assassinated I understood what they were talking about. But at the time I thought, who cares, just meeting some guy that use to be a prime minister. I didn't even know what he looked like.

We arrived at Pavellon Des Prince (spelling?) on 69 Boulevard D'Auteille (close to Rolland Gaross where the French Open is held every summer) and parked in front of the restaurant. All of a sudden, we were all pretty nervous as we entered the restaurant. I spotted a man in khaki uniform whom I thought might be Bakhtiar. As we were greeted by the host of the restaurant we were told "for security reasons" to ask for "la table du prefecteur." Whatever that meant, I thought. The waiter seemed confused at first but then we were led to Bakhtiar's table.

The whole restaurant was empty. Only the table next to ours was occupied -- by five large and very alert men. Pretty exciting and nerve-racking. I'd never been in that kind of situation before.

"A handsome, older gentleman, with gray hair and designer glasses," I wrote of Bakhtiar in my diary. He was conservatively dressed in shades of blue. He spoke to my cousin in French most of time, since she couldn't speak Farsi. Another relative couldn't speak Farsi or French. And I couldn't speak French, but could barely communicate in Farsi. So, we were all trying to figure out what would be the best language.

I got the impression that Bakhtiar preferred French or Farsi. He ended up doing most of the talking in French, some Farsi with me and occasionally English to the group. He spoke softly and gently. He seemed like a kind man. He spoke a lot about my grandfather Abol-Ghasem Bakhtiar. The usual stuff everyone always says about him; his strength, self-confidence, arrogance, hair (or lack of), 17 children and his famous words "I'm going to live forever."

The waiter came over. Bakhtiar, after asking us all what we'd like, ordered the complete meal -- appetizers, dinner, wine, desert, and coffee.

My cousin was interested in writing a biography. Bakhtiar said if a book was to be written about him it would have to be on his terms. A friend would meet him once a week for a an hour and he would discuss his life from childhood on. I got the feeling that the friend he was talking about would be me.

I thought for a moment that if I was to stay in Paris, I would perhaps meet with him and record his life. It would have been a chance for a first-hand lesson about politics and history. However, I didn't stay for long, and never heard from him again -- only in the news when he was stabbed to death. That night Bakhtiar told us about the attempt on his life soon after he arrived in Paris. A Lebanese and an Iranian accomplice fired 12 shots at his apartment, killing a bystander, paralyzing another.

But he spoke very little about politics or his past. What he did make clear was that he strongly believes in democracy and insisted that he does not believe in communism. I just watched and listened. There were a lot of things I still wanted to do in Paris.