Iran Is Our Top Priority, Says Senior US Commander In Middle East

by Defense OneAugust 13, 2020
Countering the threat from Iran is the U.S. military’s top priority in the Middle East, America’s top commander in the region said Wednesday, blaming rocket attacks from Shiite militia groups...

by Defense OneJune 30, 2019
A senior defense official on Thursday fiercely denied that Pentagon officials have told Congress that there are connections between al-Qaeda and Iran.

Roads of Iran; per capita, Iran has more women commercial bus & truck drivers than any other country in the Middle East, Central Asia or South and East Asia.

Very excited about the release of "Secrets of the Surfaces," a documentary on the life and works of the young Iranian trailblazing mathematician, who became the first woman to win the prestigious Field Medal, shortly before her death at the age of 40.

The cost of maintaining U.S. forces in the Middle East is extraordinary, at least $65–70 billion each year, apart from the trillions spent on wars there.

Nothing about the Middle East warrants such U.S. investment. 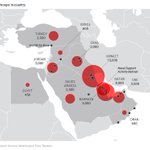 This piece of shit criminal wages economic warfare to force regime change, causing unspeakable human suffering at the behest of the criminal he's talking to on the phone, and revels in his imperial classism. https://twitter.com/CBSNews/status/1319681276236922882

Trump has Israeli Prime Minister Benjamin Netanyahu on speaker phone to discuss a deal normalizing relations between Israel and Sudan. He asks: "Do you think Sleepy Joe could have made this deal?"

Netanyahu: "We appreciate the help for peace from anyone in America"

The Arab Opinion Index, the largest public opinion survey across the Arab world, asked about respondents support for their country establishing diplomatic ties with #Israel. #Sudan was among the countries polled this year and 79% opposed. 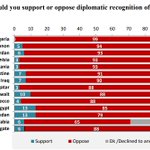