Iran executes wrestler whose life Trump asked to be spared

by PoliticoSeptember 12, 2020
Iran’s state TV is reporting that the country’s authorities have executed a wrestler for allegedly murdering a man after President Donald Trump asked for the 27-year-old condemned man’s life to...

by PoliticoAugust 20, 2020
U.S. push for sanctions on Tehran has left Europe in an awkward position.

by PoliticoJuly 14, 2020
Iran has executed a former employee of the defense ministry who was convicted of spying on behalf of the Central Intelligence Agency, the country’s judiciary said Tuesday. It was the...

How Iran Became the New Battle Line Between Conservatives and Twitter

by PoliticoJune 16, 2020
Ted Cruz wants to punish the social media giant for hosting sanctioned officials. The consequences for free speech are considerable.

Trump cleans up his comments about the Iran protesters

by PoliticoDecember 3, 2019
President Donald Trump on Tuesday cleaned up earlier comments indicating a lack of support for protesters in Iran, telling reporters he misunderstood the question. During a meeting with French President...

by PoliticoNovember 14, 2019
President Donald Trump’s political appointees inappropriately retaliated against a career civil servant at the State Department in part because of her ethnic background, her perceived political views, and the fact...

Sign up for our daily newsletter to get the top news stories delivered to your inbox.
Politics,

by PoliticoJuly 17, 2019
Trump has repeatedly urged Iran to negotiate, saying that Tehran’s nuclear ambitions are his chief concern, talking points that experts say echo the 2015 deal.

by PoliticoJune 25, 2019
A majority of likely voters in a handful of swing states do not support an American military strike on Iran despite escalating tensions.

by PoliticoDecember 14, 2018
Reza Pahlavi, the former Shah’s son, will make a rare public appearance in Washington Friday amid pro-monarchy nostalgia in his home country.

by PoliticoSeptember 15, 2018
Secretary of State Mike Pompeo and his predecessor John Kerry clashed Friday over the latter's private meetings with Iranian officials, a remarkable war of words...

Do Israelis support a strike on Iran?

by PoliticoMarch 2, 2012
Only 19 percent of Israelis polled expressed support for an attack without U.S. backing, ... while 42 percent endorsed a strike only if there is...

by PoliticoAugust 8, 2011
One day after lowering the nation’s platinum triple-A credit rating, Standard & Poor’s analysts warned Saturday that the U.S. government could face a second downgrade...

by PoliticoFebruary 26, 2011
European diplomats have prepared a list of over 80 Iranian militia and police unit commanders, prison guards, prosecutors, judges and ministry bureaucrats that will be...

Ahmadinejad to get U.N. podium

by PoliticoAugust 27, 2009
The Democratic National Committee on Thursday joined the growing group of politicians and committees pledging to return or donate to charity campaign contributions from Democratic...

by PoliticoMay 23, 2009
ANNAPOLIS, Md. – Barack Obama told graduates at the U.S. Naval Academy that of all of his duties as president, there is no higher honor...

by PoliticoMay 5, 2009
Borders USA marked World Press Freedom Day on Sunday by launching a hunger strike to protest the secret espionage trial and imprisonment in Tehran of...

In assassinating #Fahrizade, #Israel wasn't "messaging" Iran. It was murdering. Murdering a person and a path for restoring diplomacy.

A blow to future diplomacy:
Hardline students gather outside National Security Council in Tehran, ask Rouhani to not negotiate with the US, demand retaliation for the killing of #MohsenFakhrizadeh. Placards say: Silence is a permit for future assassinations.
Via @miladalavii 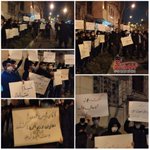 What Liberals don't want to acknowledge is that the "War on Terror" which many of them supported and still support, has done more to destroy the rules-based international order than anything Trump has done.

Let's not sugar coat it killing a scientist in broad daylight is an act of terrorism.

Yet I have not seen the word used once by the western mainstream media.

Iran’s UN ambassador weighs in, looking for SecGen @antonioguterres and the UN Security Council to condemn of the assassination in Tehran today. https://twitter.com/TakhtRavanchi/status/1332434659779764225

What was clearly a state-sponsored assassination of our prominent scientist was also a clear violation of int'l law, designed to wreak havoc on our region.

It must be condemned by #UNSG & #UNSC.

Iran won’t ever shy away from deterring aggression, or from protecting its people.

This, ironically, is *exactly* the message that Flynn gave to Russia during the 2016 transition — hey, guys, don’t get crazy with retaliation: wait until we’re in power shortly and things will be different.

This was a criminal act & highly reckless. It risks lethal retaliation & a new round of regional conflict.
Iranian leaders would be wise to wait for the return of responsible American leadership on the global stage & to resist the urge to respond against perceived culprits. https://twitter.com/AP/status/1332334130433036290

Israel is one of few states using assassination as a foreign policy tool. Israeli agents have over the years killed their real or perceived enemies in operations often involving kidnapping, torture & considerable loss of civilian life. Iranian scientists are most recent examples.