Coronavirus: Ilhan Omar calls for lifting of sanctions on Iran amid outbreak

MEE is an independently funded online news organisation that was founded in February 2014. We aim to be the primary portal of Middle East news and our target audience are all those communities of readers living in and around the region that care deeply for its fate.

So Much For ‘Restoring Deterrence’

US sanctions amid pandemic reach brink of crime against h... 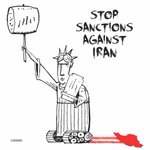