by Kourosh Ziabari | Go to Source

As Iranians took to the streets in cities and towns across the country last month in response to a massive fuel hike tax, the northern province of Guilan stood out as an exception.

Home to more than 2.5 million people, and bordering Russia from its perch on the Caspian Sea, Guilian’s muted reaction to the protest movement offers a window into the economic inequalities in the Islamic Republic today, as well as the resignation felt by many Iranians under sanctions.

Iran is now in a dramatically stronger position than it was a year ago--for multiple reasons. One of them is the stinging defeat of the US effort to reverse that Security Council resolution ending a 13-year arms embargo against the Islamic Republic. https://twitter.com/JZarif/status/1317563785457053696

A momentous day for the international community, which— in defiance of malign US efforts—has protected UNSC Res. 2231 and JCPOA.

Today's normalization of Iran’s defense cooperation with the world is a win for the cause of multilateralism and peace and security in our region. 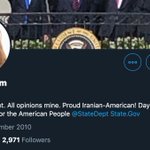