Sign up for our daily newsletter to get the top news and analysis delivered to your inbox.
Media, Science and Tech,

by Alex Kantrowitz | Go to Source

When it built its global media team, Twitter didn’t prepare for possible scenarios in which employees with access to sensitive data and close relationships with foreign governments might use it to spy, according to former employees.

“The people running onboarding didn’t do much training in terms of the specificities of the challenges that we would be facing,” an ex-Twitter employee who worked alongside Abouammo told BuzzFeed News. “Nobody told us that we would be approached, that we would be — I don’t know if ‘seduced’ is the right word — that we would be intimidated into giving any kind of Twitter information.” Twitter has not responded to questions regarding this issue.

Kuwait ports suspend travel and from Iran amid coronavirus fears

Pompeo: State Department to Designate BDS Movement as ‘An...

Riding Off Success, Iran Official Calls for Creation of P...

With the break-neck speed of Trump's concessions & actions in support of the radical Israeli geopolitical agenda since he lost the election, there has never been a greater risk of a false-flag operation to "justify" a US or Israeli strike against Iran. Watch for it.

Discrimination against Iranian academics:I’ve heard from several colleagues that their papers are being rejected without going thru the peer review process. Some western governments have instructed universities to reject applications from Iranian students.#HumanRights #sanctions https://twitter.com/mh6659904252/status/1330906817531088896

[email protected] has a history and pattern of anti-Palestinian, Islamophobic statements and accusations - and he constantly gets away with it.

As the past few months have made abundantly clear, home is not necessarily the place that we live in or are confined to. Thanks @AngharadW for depicting some of the main themes of Reading Lolita in your piece about nations, novels, and new beginnings

In her third column of the series, Angharad Williams reads Azar Nafisi's memoir and examines the power of reading to reclaim a home

DC twitter went from "we are a profoundly broken country" to "yessssss the establishment is back, guys" really quickly

Persian Shivid Baghali Polo (rice with fava beans and dill) with Koofteh (because I didn't have chicken) and Mast-o-Musir (yoghurt with Persian shallots). Oh, and the big round brown thing on the polo is bread 'tahdig' from the bottom of the rice pot. Comfort food ftw. 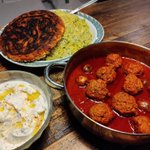 You can already see how the argument will go for the next four years: Pompeo, Netanyahu and their allies will insist that "maximum pressure" was on the brink of success until the perfidious Democrats scuttled it.

Netanyahu 'warns' Biden, as if his Iran strategy hadn’t failed miserably with Obama and Trump