Iran Is Winning The Battle For The Middle East’s Future

by Sina Toossi | Go to Source

The vision of Iran’s Qassem Suleimani will continue to triumph until Washington trades maximum pressure and regional dominance for a multilateral Persian Gulf security structure.  The historic significance of developments in the Middle East was laid bare in a recent interview aired on Iranian state television with Maj. Gen. Qassem Suleimani, the commander of the Quds Force, an elite unit of Iran’s Islamic Revolutionary Guard Corps. In the rare interview, reportedly the first given by Suleimani in more than 20 years, the elusive commander outlined the regional landscape leading up to the 2006 Israel-Hezbollah War. This was a daunting world for Suleimani, who has long been responsible for Iran’s regional policies, with hundreds of thousands of U.S. and Western troops encircling Iran and deep convergence between the interests of the United States, Israel, and leading European and Arab powers….

An 🇮🇷Iranian woman (doctor) bought a house for a mother & her daughter who lived in a dirt house and had no electricity or flowing water.
This Iranian woman is just a normal citizen like anyone else.
She also took a girl under her own house because she was going through poverty

Iran joins an elite club with only the U.S. Navy and Britain’s Royal Navy having such large UUVs.
Mystery Submarine May Reveal A Major New Capability For Iran via @forbes

Mystery Submarine May Reveal A Major New Capability For Iran

Lol. The Obama ambassador who aided, abetted and cheered every Israeli massacre of Palestinians, then when his term was over stayed in “Israel” to personally enrich himself from apartheid and influence peddling, is woke. https://twitter.com/danielbshapiro/status/1266377350402281476

if this were footage from another country, we'd be calling this a totalitarian police state https://twitter.com/NewDay/status/1266315061209030658

Minnesota police arrest CNN reporter and camera crew as they report from protests in Minneapolis https://cnn.it/2AlGl9s

"All great changes are preceded by chaos."

"All great changes are preceded by chaos." Deepak Chopra picture quote about chaos as a precursor to great change.

Y’all — Van Jones just said on CNN that it’s the White, liberal HRC supporters we have to look out for, and I- 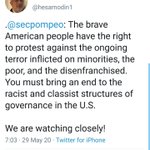