Sadr calls for ‘million-man march’ against US presence in Iraq

Iraq’s populist Shia leader Muqtada al-Sadr has called for a “million-man march” against the presence of United States troops in Iraq just days after the country’s parliament voted to expel foreign troops from Iraq.

“The skies, land and sovereignty of Iraq are being violated every day by occupying forces,” Sadr, who also leads the Sairoon political bloc, wrote on Twitter.

"...I have never seen so much anger and frustration in the United States in my entire lifetime, and it is truly a recipe for disaster."

US has called out the National Guard and is firing live rounds at protestors - like Kent State in 1960s? Let no one pretend the US is the great role model for peace & democracy at home, or abroad that can preach to others. It uses violence to impose its, will. https://twitter.com/EgyptianWeeknd/status/1266221990899310598

Iran is working to develop some of its underdeveloped, major oilfields which could help the country to seize Saudi market share in China

Iran is working to develop some of its underdeveloped, major oilfields which could help the country to seize Saudi market share in China 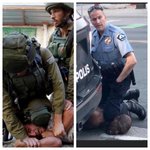