by The Guardian | Go to Source

The US has slapped a raft of new sanctions on Iran over its nuclear weapons programme, claiming it is enforcing a UN arms embargo – and demanded that the European Union follows suit.

The Trump administration on Monday named 27 individuals and entities, including officials at the Iranian ministry of defence, nuclear scientists, the Atomic Energy Organization of Iran and anyone found trading in conventional weapons with Iran.

The US finances ethnic cleansing and apartheid against Palestinians, and then has the gall to talk about civil rights in China https://twitter.com/jerusalem_post/status/1318939355059290112

The official US position on the settlements is that #Israel should never need to evacuate them, @USAmbIsrael David Friedman said.

Didn’t the USG just randomly text phones in Iran asking for info on election interference? Seems about as weird as Iran allegedly spamming inboxes of Dem voters with threatening messages: The emails claimed to be from the Proud Boys, a far-right group supportive of President Trump, but appeared instead to be a deceptive campaign making ...

Pompeo was just asked about the detained Palestinian man who is approaching 90 days without eating in protest against Israel’s extensive use of detention without charge. Human rights groups say he's on the brink of death. Pompeo said "Israel has the right to defend itself" 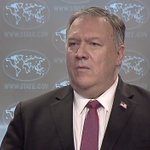 Iran is now in a dramatically stronger position than it was a year ago--for multiple reasons. One of them is the stinging defeat of the US effort to reverse that Security Council resolution ending a 13-year arms embargo against the Islamic Republic. https://twitter.com/JZarif/status/1317563785457053696

A momentous day for the international community, which— in defiance of malign US efforts—has protected UNSC Res. 2231 and JCPOA.

Today's normalization of Iran’s defense cooperation with the world is a win for the cause of multilateralism and peace and security in our region.