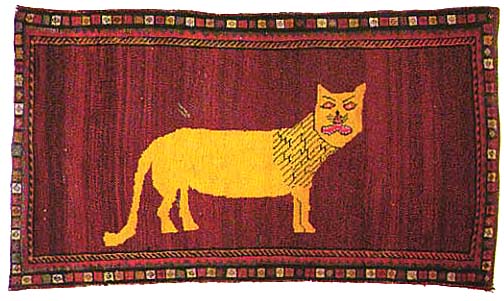 This lion is another example of the simple patterns of weaving of the Qashqa'i tribes which incidentally also demonstrate naturalistic tendencies. A brilliant yellow has been used for the body and head and with the exception of the eyes, eyebrows, nose and mane no other designs or lines appear on the solid color of the figure, so that it looks as though the lion has been cut from yellow paper and pasted on the dark background of the rug. The background is filled with fine lines of red and a nearly black dark blue which in some places creates a beehive pattern. In recent years a large number of these lions in a variety of forms, against a spotted background, locally referred to as "salt and pepper" have been woven. (Back to article)