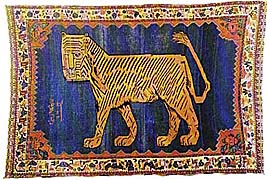 From "Lion Rugs; The Lion in Art and Culture of Iran" by Parviz Tanavoli (Trans Book, New York, 1985). Click on images to see full images of the rugs.

I found my first lion rug in early 1970. Its unusual pattern set it apart from all other Iranian rugs and so captivated me that I bought it without any hesitation whatsoever. A week or two later another lion rug, different from the first, came into my hands, and then a third. The discovery of these rugs was so exciting to me that I thought about them constantly. I myself knew nothing about rugs like these, nor did those from whom I had purchased them, except for the fact that they were called gabbeh-ye shiri ("lion rug") in Persian. This lack of knowledge and the utter fascination these rugs held for me led me to pursue them far and wide.

The first of many trips I made in quest of lion rugs was to Shiraz, which is about a twelve-hour bus ride from my home in Tehran. In Shiraz, I found more examples. For several years thereafter, my life was spent traveling back and forth between Tehran and Shiraz, visiting bazaars on the way, and scouring the mountains and plains of Fars Province for the makers of these rugs.

Two things drove me on. The first was the knowledge that many of these rugs were still in constant use among their creators and, if not preserved in time, would be completely worn out and discarded. The second was the variety of these rugs. Almost every day I would find a new lion and the prospect of yet another caused one to imagine a thousand possible patterns and color combinations. In many instances, these reveries were not far from the truth. Those were exciting days. Rug connoisseurs and merchants advised me not to buy such coarse weavings, or at least to buy less frequently so as to not to drive the prices up. The tribesmen were somewhat embarrassed and apologetic that the lions of the rugs were not naturalistic representations of real lions. Yet they were happy that someone would be so interested in their art.

Symbol of majesty and power

Many secrets lie behind the enchanting patterns of the lion rugs of Iran. The unusual subject matter and composition that distinguish these form other traditional rugs require some explanation, especially since they do not seem to have been chosen solely to please the eye. Lion rugs, symbols of the tribal bravery, were objects of every day use in the dwellings of their creators. For this reason, many of them wore out and in time were discarded. Those that have survived date only from the last two centuries. There is evidence, however, that the lion motif was utilized by rug weavers prior to this.

The close relationship that these rugs have with stone lions and other objects which bear the image of this animal leave no doubt that the lion motif played an important role in the culture, religion, and nationalistic sentiments of the Iranian people. Indeed, in the course of the Iranian history, no other symbol has been so long-lived or meaningful. Bravery, patience, generosity, manliness, nobility, and purity are all qualities Iranian have associated with the lion.

The importance of the lion in ancient Iran was such that Iran was called "the land of lions." In Zoroastrianism, the ancient religion of Iran in which elements -- water, fire, and earth -- were accorded great respect, the lion was identified with fire. During the achamenid and Sasanid periods, the lion was the symbol of majesty and power, and, with the coming of Islam to Iran, the lion motif continued to play a role in the decorative arts.

The lion motif took on a renewed significance in Iran with the establishment of the Safavid dynasty in 1501. In the framework of Twelver Shi'ism, the official religion of the Safavids, Ali Ibn Abi Talib, the Fourth Caliph, and First Imam, and leading figure of the sect was known as the "Lion of God." This revived use of the lion motif brought only a chance in the form and not in the content of the lion symbolism, for Iranians, from their long experience with invaders and foreign rulers, have always been able to adapt themselves to changed circumstances without losing sight of the original import of their symbols. In time the lion also came to be the official emblem of the Iranian state and the symbol of the nation.

Most questions people ask about the lion rugs concern the subject matter: Why did the weavers of these rugs choose the lion and not other animals like the horse, camel, or goat? Without the cultural context described in this introduction an answer to this question would be difficult; all one could say would be "it is due to their appreciation of bravery and prowess" or "it is for the protection of their tents." However, if the question is "why were lion rugs woven mostly by tribesmen, especially those of Fars?", very specific answers can be found. It would not be an exaggeration to say that in the opinion of the tribesmen of Iran the most important characteristics of a man are courage and virility. The opposite of these traits, fear cowardice, are considered so vile that their attribution to a person can discredit an entire family or tribe.

Life in the mountains and plains and its attendant struggle with heat, cold and wild animals have taught these people the art of survival. For them the lion symbolizes bravery and prowess. Thus many tribesmen have names which include the Persian word shir (lion) such as Shir Ali or Alishir, Shirzad, Shirdel, and Shir Mohammad. Others have names like Arsalan or Aslan, which mean "lion" in Turkish. Still others are known as Asad, "lion" in Arabic. They often tell wonderful stories of how their fathers and grandfathers hunted lions. As to why most lions rugs were woven in Fars, we must first say a few words about the geographical setting of this region and the existence of lions there, something that without doubt had an influence on the prevalence of this type of rug.

Because of its special natural setting which includes numerous thickets and large game such as wild boar, mountain goats and rams, Fars Province provided an ideal environment for the lion. For centuries this province was known for its lions, and various beliefs and customs concerning the lion flourished there. In the 12th century Farsnameh of Ibn Balkhi, the oldest geography of Fars, such as districts as Kamfiruz and the Arzhan Plain are called "lion mines." Many references to the lion hunting expeditions of the Iranian shahs and local rulers of Fars are made in literary texts and poetry of the Islamic period down to and including the Qajar period (1779-1924).

Exactly how long the lion existed in Fars is a matter of considerable interest. According to the Iranian Department of Environment, the last lions were seen in Fars at the beginning of this century while the last lion in Khuzestan was seen near Dezful in 1942. The extinction of the lion in southwestern Iran was simultaneous with the end of traditions of carving lions in stone and weaving their images in rugs. The oldest surviving lion rugs date only from the last two centuries.

Other books on rugs by Parviz Tanavoli available through Amazon.com:
- Kings, Heroes & Lovers : Pictorial Rugs from the Tribes and Villages of Iran (1997)
- Shahsavan : Iranian Rugs and Textiles (1985)