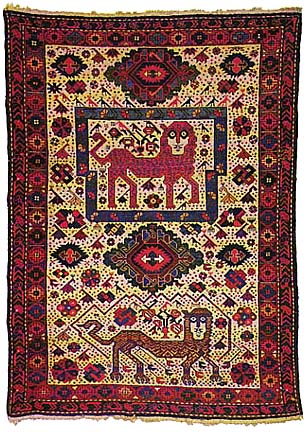 We have seen that the lion motif was popular with nomadic and village rug weavers in Iran, particularly in Fars Province, and also in the northwest. Although this rug is the first depicting a lion woven in the Shirvan area of the Caucasus that I have seen, I feel certain that it is not the only one that was woven in the Caucausus, for the lion figure seems to have caused the weaver little difficulty, which would seem to indicate the lion was not an unfamiliar motif for weavers in the Caucausus. (Back to article)