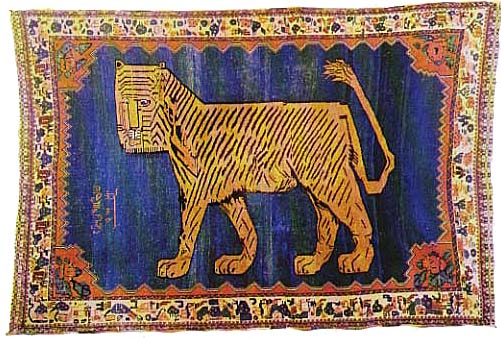 This rug is the mate to a rug, showing the same animal (which has both stripes and spots) walking to the left (in symmetrical mirror image to this one) published in my exhibition catalogue Lion Rugs from Fars (Tehran, 1978). According to information gathered during research conducted in the Marv Dasht area east of Shiraz, these two rugs were woven in that area. A Qashqa'i khan named Nasrollah Khan is known to have lived there three generations ago, and to have died in the late 19th century. The high quality of the rug from the point of view of material and color is a further indication that this rug could be nearly a hundred years old. The lion of the rug has a special dignity. Being placed on a blue ground that is devoid of other ornamental touches adds to its magnificence and power. (Back to article)