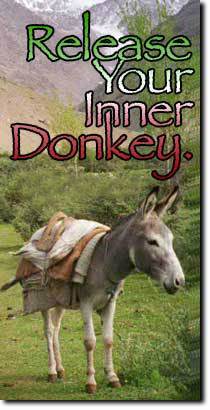 As we move through the millennium (has it started yet?) and we observe the many missteps and mistakes made in the world today, it becomes only too obvious to Iranians just how khar (dumb as a donkey) some people are and what an olagh (ass) they make of themselves. Although as Iranians we have an innate sense, no- gift, for recognizing stupidity when we see it, we nevertheless mistakenly associate it with being a donkey.

But let's face it folks, whether we like it or not, for better or worse, the donkey has been our national symbol as far back as you want to go. I'm not talking about the cute fuzzy burro or the proud and surefooted mule. I'm talking about your basic, vw beetle, 2-speed gray and white model, good old dusty, dahati-khar.

Now, if you can stop foaming at the mouth with anger and stop taking everything so personally, at what I just wrote, and listen for a minute, you might agree that this symbol of at once obstinate stubbornness, and never give up, can do it or by golly will die trying....er ness, is in fact very well mated to our very individualist character as a prouder than most, people of the world.

You can't make a khar do just anything, and many have tried, but what he puts his mind to do, he will do, and surprise you at how well he did it, and amaze you at what seemingly insurmountable obstacles he overcame to do it. Surely this is an admirable trait, No?

A khar is a true independent. Watch and you will rarely see a group of donkeys following each other step by step. Look closer and you will see each donkey makes his own path, sure they may be close, but completely unique, as if to say, "I'm going, but I'm going my own way". That's us. Sure we're all Iranian, sure we all drive beemers and benzes, sure we've all over-splashed Eau Sauvage and Chloe just to go to a chelokababi at one time or another. But look closely at our subtle differences. Admit it, you know what I'm talking about.

And let's also be absolutely clear, donkeys are not camels!

Whether you agree or not, the khar has been our cultural nemesis. A symbol we have been hesitant to accept. And you know what? I say it has hurt us. I say we must face our fear. I say there is nothing to fear! I say we embrace our inner khar and let it out!

Would it help if Illustrate with a few examples? OK then.

For hundreds of years Iranians have faced the dilemma of which side of the modern religious world we ought to be on. While the ancient Persians who invented organized religion in the first place, and gave the world many of the religious customs we have come to believe aren't ours (christmas, gift giving, feasts, angels, the halo, unicorns, beer, and ice cream etc.), modern day Iran however is currently a moslem state. Historically though, we have yet to see any of the tangible benefits, maybe because we have never quite fit in with the rest of the moslem world. We have our own interpretation of the Qoran. We're Shiite when it seems that all the really cool moslems are Sonni. Just look at our Mosques. We've even built them differently. Compared to standard mosques, Iranian mosques are almost erotic.

I found an interesting image from ancient times that maybe explains why we just can't seem to quite surrender to Eslam like we're supposed to. Come with me for a minute and just play along, you'll see the logic if I'm right. This picture depicts Mohammad riding a camel, but next to him it shows Jesus riding a donkey. And there are plenty of pictures showing Mary, on a donkey as well.

But if we continue by our pre-conceived notions that the donkey is lowly, then we would be wrong. Also, this raises a question, "Why didn't Mohammad choose a donkey to ride?" Did he choose the camel because he wanted to be higher up, kind of like a 14th century justification for an SUV. Did he reject the more compact donkey? Did he reject us? Is that why we feel like we don't belong with the rest of the moslem world?

Need a more practical advantage of embracing our inner donkey? OK how about sports? Think of this, we've never ever had a unifying mascot. Some of us liked Persepolis, some of us liked Taj (for some insane reason!), and that's pretty much been it. We had as good a national team as ever in '98 but with one difference, no mascot! We came close again last time, but faltered and fizzled in the qualifying match against Ireland. Some blame the coaches, others blame player egos. I say it's because we don't have a unifying symbol that embodies our truest spirit.

And what other sport do we really excel in? Winning title after title, gold upon gold? Weightlifting! Let's see, a small stocky creature that can carry an unusually large amount of weight. Hmmm! Sounds familiar! If we had a proper mascot, maybe during those times when we need it, we could draw on for that extra bit of strength, to haul that load one more step, to carry that burden, to stretch out just a little bit further... and prevent the damn ball from rolling into the back of the net! I say we look no further.

And finally we come to the very symbol of our national identity. Our flag. A country's flag is supposed to represent the land, and the spirit of the people or have some historic meaning conveyed in colors and stripes. It's supposed to be unique and bring out nationalism when you see it. It's supposed to make you cry when it is raised at the Olympics. Let's face it, our flag does none of these things (except maybe make you cry, but for entirely different reasons). About the only thing our flag has ever done is to to be mistaken for the flag of Hungary (upside down flag of Iran) or the sideways flag of Mexico or Italy. Personally, I don't see any benefit in being mistaken for an Italian, Mexican or Hungarian. Although I was treated to a round of Corona once during the Iran-Mexico match. But that was only because we lost.

I say we get a flag that depicts the real spirit of the Iranian people. A spirit that has carried us steadfastly through history, a spirit that is indomitable, unique, stubborn, determined, reliable, small but sturdy. Ladies and gentlemen I present the new flag of Iran!

And you want a country slogan to go with it? How about,