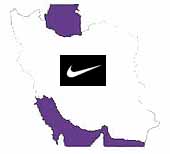 Back in 1992 the following false news story was posted anonymously on the Iranian newsgroup SCI. The article was widely distributed among Iranians on the Internet and quite a number believed it. This triggered a series of similar "news" stories, with the most recent poking fun at former U.S. presidential candidate Bob Dole's name.

TEHRAN, IRAN (AP) -- Nike Corporation, Inc. of the United States has opened its first of three large-scale factories West of Tehran. The factory will reportedly produce 25,000 pairs of athletic and walking shoes per month.

In addition, various other merchandise such as socks, T-shirts, visors and tote-bags will also be manufactured.

The company's president and CEO, Kah Fasch stated ``This marks our long awaited rebirth of direct economic ties with Iran. Armed with Nike's 'Just Do It' attitude, we conquered all political obstacles and achieved our goal''.

In a related story, Nike has mysteriously stopped shipment on over $1,000,000 worth of promotional merchandise destined for Iran. Unnamed sources from within the company told Associated Press that Nike of America had decided to use its "Just Do It!" slogan in Iran and had printed it on all its promotional merchandise.

In order to surprise its Iranian distributor, Nike apparently did the translation itself, using a dictionary. Due to undisclosed reasons, the large inventory, all of which displayed the slogan "Faghat Bokon!" in distinctive colors and styles was refused by the Iranian officials.