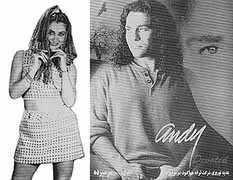 Promotional photos in the Iranian press in
Los Angeles for pop singers Shohreh and Andy.

From a review in LA Weekly in July 1994 by Jac Zinder.

Jamileh, a 40ish belly dancer wearing a spangled turquoise outfit, shakes everything when she moves. The faster the band pounds out an Egyptian riff, the blurrier she gets, somehow rolling all of the muscles in her body independently. Her hips swivel to the right, stomach jumps left, mane of brown hair twirls clockwise and her chest heaves straight out in front of her.

As if that isn't enough of a show, Jamileh also manages to dance with her face; wagging an eyebrow, contorting her lips and screwing up her cheeks in time to her percussionist's furious dumbeg. Unlike the aspiring actresses who usually turn up at shows like these, she's more interested in being funny than sexy. Tonight at Studio City's Club Teheran, she's second on a bill of six performers, following a set of international disco pop hits and preceding one of the lousiest female impersonators I've ever seen.

With its high, pointed roof and alluring deep blue lighting, Club Teheran looks like a cross between a ski lodge and a tiki bar. Plant "life" is everywhere, from plastic potted trees wrapped up with twinkling Xmas lights, to wreaths of fake fruit and sunflowers above the bar, to long, twisting vines that crisscross the pointed, fabric-covered ceiling. The stage backdrop looks like a Lite Brite game; blue and red pin-lights shine through high walls of interlocking black acoustic tiles.

Jamal Vafaie, a semi-classical Persian singer, comes onstage stretching a single note out for what seems like an eternity, shaking his hands and wailing like he's gonna bust a lung. A dapper gentleman in a close-cut blue suit and one of the top singers in his style, he's in the middle of a six-week run here. His songs are slow and complex, a sweetly narcotic mix of highly emotional operatic melisma with Middle Eastern cabaret music and tense showmanship.

He rakes a finger across his brow or karate-chops in the air, doing an impish leap to urge the crowd to sing along. He prowls around, pulling the mike cord as far as it will let him go, and sings right in the audience's face. As they crowd the floor and cheer Vafaie on to even greater heights, the room seals itself off, and the outside world no longer exists. We could be anywhere; all that matters is that voice.

Mahasty followed Vafaie's heat with a set of dignified Persian pop cool. Where Vafaie was manic, she was deliberate; where he would scream, she'd just smoothly croon. She stood almost motionless in a black business suit with an enormous, white collar and puffy sleeves, and she sang in a controlled alto, leading the band through long 6/8 grooves.

Unfortunately as her set was approaching the peak, a fistfight broke out that involved half a dozen people. The band kept on playing, but Mahasty looked absolutely mortified. She finished her show, but the mood just wasn't quite the same. There's nothing more upstaging than fisticuffs on the dance floor. As the next entertainer vamped a rousing version of 'Tequila' on sax, I slipped out the back door.