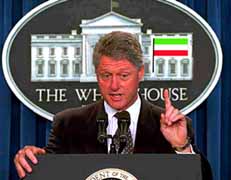 On November 4, 1996, one day before the U.S. presidential election, subscribers to THE IRANIAN TIMES, an email service with nearly 1,000 members, were asked to pick their choice. The following is the result of the poll and comments from some of the subscribers.

-- If I could vote, I would vote for Ralph Nader... Clinton is ultimately a Republican. But if I really had a choice of putting anyone on the ballot, I would put Clinton's wife Hillary. She's my heroine...

-- I'm surprised at all the support for Ralph Nader. It must be a California thing! (Or maybe an Iranian thing, since someone mentioned his father might have been Iranian?) Anyway, we haven't heard much about his candidacy here in Arizona.

-- Are you doing this for THE IRANIAN ya barayeh phusuli (or are you just being nosy)?!!

-- My choice for U.S. president is Mr. Ralph Nadar. I wish there were more enlightened political figures like him in the U.S.... and in Iran (sigh)!

-- Khob (Well), I would vote for Mr. Perot. If he has made himself sooo rich, he could do the same for America. HOWEVER, marg bar Amreeka (Death to America). So, I would vote for the worst candidate, Bobby Dole, Mr. Pineapple.

-- You are better off voting for Clinton, since any vote for somebody else will enforce Dole's position. I myself like the Green Party's ideologies but this country is too immature for such "radical" positions on social issues!

-- My wife voted for Perot and on local races for the Democrats. The main reason I think she did not vote Republican was that she and I believe that the Republican Party is the religious right and, to put it simply, going off the deep end. My experience with other Iranian-Americans in this region of the country has been very interesting. They seem to vote for the sole purpose of what the candidates' position is about Iran, and not what is good for their children and for them in this country. I did not get my citizenship papers in time to vote. And how I wish I could have voted. I Know that in November 2000, I will the first to vote in my family.

-- This was my first time voting in the U.S., second time voting in my life. The first time I voted was for the first presidential elections in Iran when I was around 16. The experience was quite a bit different.

-- I'm voting for Perot. By the way, Nader's father is Iranian, correct?

-- For me the key word at election time is : Democrats

-- I cannot vote today :-( If I could, I would have voted for Clinton.

-- I WILL vote for Bob Dole, although he's not a very strong candidate. But I'd pick him over Clinton any day!

-- I think I would vote for Bill Clinton. He seems to be more understanding toward the immigrants and the less off in this country, although as far as foreign policy is concerned, I don't think it matters a great deal which candidate is in power.

-- I will vote for Ross Perot because I don't like the other candidates, even though I don't like Ross either.

-- In order of priority, I would vote for: Clinton, Perot, Dole, Nader.

-- Although, Bill Clinton is not my favorite president, I'll vote for him, hoping he will shift more toward democratic concepts.

-- I voted for Ralph Nader, even though I'd like Clinton to win!

-- You forgot to mention Harry Browne from The Libertarian Party. He is on all 50 state ballots. Not even Perot is on all 50 states. The party is indeed the third largest party in the US. In any case, I vote for Clinton.

-- I'd vote for Ralph Nader (How could I loose!?) I asked my office mate, who is American, and he also said something like that he'd like to vote for Ralph, but he thinks that his vote would go to waste, so he may go for Clinton. I told him vote for the one who you think is the most fit, and don't be scared. Of course, if one is not certain who is the best, then other pragmatic issues come into play.

-- Ralph [Nader] sounds interesting, but I really don't know much about him, which should tell you something about communications and the power of the media in this country. So, I'll do Clinton, too.

-- I don't have enough information about Ross Perot and Ralph Nader, so I will vote for Clinton.

-- I'd go for Clinton - not because he is necessarily the best choice, but he's not as bad as the alternatives!

-- I am sending my vote to Bill Clinton, quite strongly even though I am neither American nor live in the United States.

-- I will vote for Dole today 'cause he may die in office and Kemp would become president.

-- Bill Clinton, the one and only. Not because there are no other options but because he is a good choice for the presidency. Lets see how many people would vote for Hillary.

-- I would vote for Senator Dole and I don't know why. If you ask me later I'll tell you why.

-- I actually voted for Clinton because he was the lesser of two evils and Nader is a little nuts.

-- Although I don't think it makes much of a difference at this point who is in the office of the presidency, I would definitely vote for Dole. He is a man of honor and integrity. Yes of course he has his flaws - for one he is a politician! - but Dole represents my family values, my moral values. I believe these are the most important issues in life, not money, nor environment, etc. After reading all the comments others have made, I thought to myself..."what happened to the iranian culture I grew up in?" I left Iran in 77 when I was 15. I have held on, why did you let go?

-- I know everything is finished and Bill is president again. But please, let me say something: I don't see my existence through their (American politicians') eyes.

* THE IRANIAN Surveys
* Bookstore
* Cover stories
* Who's who