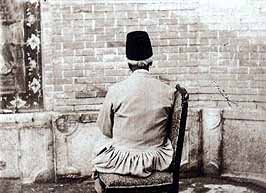 Persians in the
Russuan empire

Persians in Caucasus and Central Asia in late 19th and early 20th centuries: The number of Persians in the Russian empire or its territories increased steadily in the second half of the 19th century. They consisted primarily of migrants from Persia's northern provinces (chiefly Azerbaijan), who traveled to Caucasus and, to some extent, to Central Asia in search of employment. Although the bulk of migrants were involved in some form of short-term or circular migration, many stayed in Russia for longer periods or even settled there.

The first traces of migration were recorded as early as 1855. The British consul in Tabriz, K. E. Abbott, reported more than 3,000 passes issued by the Russian consulate in two months alone. However, the process gathered pace after the 1880s, and by the turn of the century it had achieved a scale and consistency that was sufficient to win the attention of many scholars, travelers, and commentators of the time.

According to the returns from the first national census of Russia, some 74,000 Persian subjects were enumerated in the various parts of the empire as of 28 January 1897. Of these roughly 28 percent (21,000) were females. The largest single grouping was in the Caucasus region, which accounted for 82 percent of the total. Within the region the four major towns of Baku, Elisavetpol (Ganja), Erivan, and Tbilisi accounted for as many as 53,000 or about 72 percent of all Persians in the whole empire. Next to Caucasus in numbers of Persian residents was Central Asia, where numbers surpassed 10,000. According to the same source, Persian-speakers (as distinct from Persian subjects) numbered only about 32,000, suggesting the predominence of Azeri-speaking Azerbaijanis among the migrants.

Other records of the migratory movements or of Persians residing in Russia are not as systematic and reliable. Many travelers' accounts and political memoirs attest to the importance of the numbers involved, yet they are often contradictory or incomparable. Further useful information is, however, available from data on passports and visas issued at the Russian consulates in Tabriz, Mashhad, Rasht, and Estarabad. These data reinforce a picture of consistently rising numbers of Persian travelers to Russia, averaging about 13,000 per year for the period 1876-1890 and rising to over 67,000 at the turn of the century.

By 1913 over a quarter of a million Persians (274,555) were reported to have entered Russia. However, this excludes illegal migration, which by many accounts was also substantial (200,000 illegal immigrants for 1911, according to one report). Equally large numbers of Persians were reported to leave Russia each year (e.g., 213,373 in 1913). It has been estimated that net immigration to Russian territories amounted to about 25,000 each year on average between 1900-13. The total number of Persians in Russia before World War I is thus likely to have been about half a million.

An overwhelming majority of these migrants, and particularly those from Azerbaijan, were common laborers in pursuit of work. It is believed that the largest numbers left Persia regularly around April and September, when agricultural work in Transcaucasia was at its peak; movements declined subsequently in summer and winter. The rest of the immigrants came from a variety of social background and included merchants, traders, artisans, etc. who traveled to Russian empire in the face of expanding economic relations between the two countries. Data on the social composition of migrants are rare, but according to Russian consular reports as high as 93 percent of the total 59,121 visas issued in Tabriz in 1904 were issued to workers. For Rasht the corresponding figure was much lower, about 27 percent of a total of 3,027, suggesting the importance of trade and mercantile activities for travelers from the Caspian littoral.

Visa data also show Azerbaijan as the principal Persian province from which migrants set off for Russia: 90 percent of all permits issued in 1904 were issued in Azerbaijan (59,121 in Tabriz and 3,148 in Urmia compared with 5,459 in Mashhad, 3,027 in Rasht, and 652 in Estarabad respectively). Parallel to this, many peasants left Khorasan each winter to seek work in Central Asia. Others departed from as far south as Sistan, although their number was far more modest.

Most Persians took up simple manual jobs in Russian towns or in the countryside. In some parts such as Elisavetpol, agricultural lands were almost exclusively operated by Persians who took up occupations normally refused by local workers on grounds of inferior pay and conditions of work. Similar accounts are available from the Baku guberniya and Tbilisi, where many Persians worked in the cotton fields on a seasonal basis. Persians were also attracted to a variety of other occupations. In Baku they reportedly worked as shopkeepers, mechanics, masons, carpenters, coachmen, carters, and laborers.

As a measure of their dexterity, Persians had earned themselves a reputation of being the "best masons" in Transcaucasia. Most new buildings in Tbilisi were attributed to Persian construction workers and masons. In Baku much loading and unloading of ships relied on porters from Khalkhal and Ardabil. Many also toiled on the roads and in railway construction (e.g., on the Trans-Caspian railway and the new railway from Tbilisi to Alexandropol and Kars).

In many branches of production in the Caucasus Persians comprised sizeable proportions of the work force. In the Baku oil industry, for instance, their numbers and share in the work force rose steadily after 1893: from 11 percent in 1893 to 29.1 percent in 1915, constituting the largest single national grouping in the industry, which reached a total of 13,500 by 1915. Similarly, in the province of Elisavetpol over a quarter of permanent workers in the copper smelting plant of Kedabek were Persians.

The majority of these Persians, however, held low-paying jobs that had little or no security. Average daily earnings of unskilled Persians in 1904 are reported as 60-70 kopeks, or 20 kopeks lower than the general average rate of pay. Persian dock workers in Baku worked fifteen to eighteen hours a day (often at night), ate badly, and many slept under trees and in gardens. According to another source, the fact that most Persians of Tbilisi shared one room among three or four people hampered attempts to contain the periodic incidence of cholera in the town. Moreover, under a 1903 law, foreign workers were denied the protection of safety regulations at work. Even the oil workers in Baku were no exception to this. Their economic and political insecurity was highlighted during the 1905 labor unrests, when thousands were forcibly extradited.

Much of the critical literature around the Constitutional period has identified growing economic hardship and political oppression at home, in particular affecting the peasant, as the principal forces behind the Persians' drive into Russia in the closing decades of the last century. Although relevant, however, it is doubtful whether economic and political factors alone can provide an adequate explanation of this phenomenon. Other writers have stressed the role of incentives, namely, savings opportunities in the face of better work prospects and differential earnings abroad, which were accentuated by the depreciation of the Persian currency.

Russia's powerful economic drive and industrial transformation in the closing decades of the century and the attendant critical labor shortages in the bordering provinces are thought to have reinforced these opportunities for migrants. Limited data on currency remittances by returning migrants seem to reinforce this picture. Minorsky gives a figure of 1.8 million rubles for Azerbaijani migrants alone in 1904; Entner cites 3 million rubles converted by the Russian Bank in 1909. Both figures exclude unofficial transactions.

Interaction with the Russian society and polity in general helped to widen many migrants' social and political awareness. It also fostered socialist thinking and values among them, leading some observers to attribute the emergence of an industrial working class in Persia to the migratory movements in these years. With the rise of the social democratic movement in Persia, Persian migrants to provided revolutionary assistance to comrades in Persia, including inter alia, the delivery of printed propaganda from Caucasus and the despatch of militant workers from the Caucasus to fight alongside Sattar Khan during the seige of Tabriz.

According to other accounts too, the politicization of Persian workers in Russia was extensive during a period beset by revolutionary turmoil in both countries. In the 1906 strike in the copper mines and plants of Alaverdi in Armenia about 2,500 Persian Azerbaijanis were believed to constitute the core of strikers. This politicization was also reflected in the forcible extraditions of 1905 referred to above.

The Qajar class structure: The privileged included princes, governors and prominent descendents of the prophet. (THE IRANIAN, Dec96/Jan97)

The Dog: The love-hate relationship with man's best friend. (THE IRANIAN, Sept/Oct 1996)

Sabt-e ... Ma: An interview with Ehsan Yarshater, editor of the Iranica, in Persian. (THE IRANIAN, Sept/Oct 1996)

Sharh-e Hal: An autobiography by Ehsan Yarshater, editor of the Iranica, in Persian. (THE IRANIAN, May/June 1996)