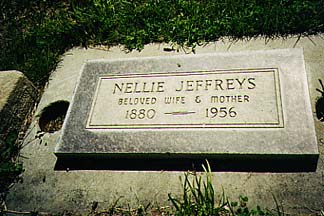 Oh Nellie!
I didn't tell her about the lavender wisteria in Tehran

My grandmother Nellie, never told me what she wanted or who she was. She was from Midvale, Idaho, population 100. I went there long after Nellie was gone and had a cup of coffee in Nancy's Cafe. I couldn't find the family graves of MacRoberts and MacKey, where my great grandmother and great grandfather were buried. I stood on the hill near a fading oak tree in the old cemetery and looked out on voluptuous green hills and fields lightly fragrant with wheat and wondered what life would have been like there for Nellie. I thought about buying one of the boarded up stores and opening an art gallery. I felt at home. I could feel Nellie was there eating golden peaches.

Nellie was at home on 819 South Holt Ave., in Los Angeles, in the kitchen. She would fry the bacon and save the grease. She would cook peaches for winter and put them in jars like her mother Ruth had done in Idaho. We came to live with her when we came from Tehran in 1940. It was strange for both of us. At first it was the language barrier and then it was either too late to talk or we had all stopped talking. There was no chatter in the house or laughter either. Helen was out working and going to school. Aunt Mary worked at Sears. Papa was in the yard or garage or his war den. Every wall covered with pictures of the war: The Spanish American War, World War I and probably a few Indian wars for which we had no pictures. In a big rectangular photograph, Papa in his army captain's uniform was sitting on a horse, smiling.

I was out roller skating around and around the block and looking at houses I liked with pink bougainvilles and brick walkways. I would end up climbing a tree seduced by a California sunset.

Nellie was the only person who wanted me to stay with her when we were going to move to Westwood. The only one who cared, even when she spanked me hard. She let me eat cookies before dinner and let me dry the dishes. She would look inside the blue velvet couch from Sears for change from Papa's pocket so I could buy ice cream from the Good Humor man.

She didn't tell me about the MacRoberts or Mackeys.

She didn't tell me about Midvale or her five sisters, Malinda, Katherine, Elizabeth, Florence and Lettie. About her mom Ruth Sophronia Mackey or her Dad John MacRoberts who married Ruth in Kentucky on 27th July, 1865, 65 years before I was born in New York City.

She didn't tell me that Ruth and John in 1875, went to Idaho on the Oregon Trail. Glorious sunrises in the heart of soaring eagle country they sang HIS TRUTH IS MARCHING ON. GLORY, GLORY, HALLELUJAH. Free virgin land to those who could kill 60 million buffalo and the Nez-Perez and then make a homestead.

I found Nellie's birthday, 29th October, 1880, in some papers in Helen's trunk after Helen died in Tehran on 2nd January, 1973. Helen was Nellie's daughter and my mother. We never bonded.

I gave Helen a dozen red roses and a blue satin quilt (her feet were always cold) for her birthday on 24th December, 1944. We had left Nellie's house and were getting ready to return to Iran.

Nellie died in a nursing home alone. When I went to see her she said, "Thank you for coming to see me, honey." She was buried with the Jeffreys, Papa's family, in Weiser, Idaho, in 1956. Papa joined her six months later.

Oh Nellie, I wish you would have told me!