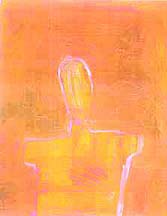 Thursday morning. Time to visit some of the Iranian clients on my caseload. I start with responding to a report about an Iranian male in his late twenties who has been abusive toward his parents. I make the house visit with law enforcement. His father opens the door and says his son is asleep. We go inside.

The apartment is furnished nicely with all sorts of Persian furniture from rugs to a samovar and miniature pictures. The son's room is different though. There is aluminum foil everywhere; draping the windows, on the radio in shape of a mini satellite dish, and on the ground.

The father says his son, diagnosed with schizophrenia, is trying to communicate with outer space. He beat up his mother the previous night, thinking that aliens have abducted his real parents, and the two people living with him now are the alien replacements. The elderly mother is quietly crying in the living room.

The father asks me if I or the police want some tea. We politely decline and begin to wake the son. He has no idea who we are. He thinks I'm an Iranian secret service agent, trying to take him away and torture him.

He admits to the beating. I ask him a few questions and find him to have no concept of time and clearly delusional. I put him on a 72-hour psychiatric hold, and the police take him to the emergency psychiatric services.

The neighbors have gathered around and the parents look ashamed. The mother tells me "Aberoomoon raft, gonaah'e maa chi bood?" ("Our reputation has been destroyed. What sin did we commit [to deserve such punishment from God?]") I have no answers. All I can say is that it's not her fault and that I will be in touch. Their tiny figures seem smaller as I look back at them on my way out.

The second visit is to a house nearby where a Persian family have two feuding adult children. The son is schizophrenic and the daughter is developmentally disabled. The brother has thrown the sister out of the glass window after she stabbed him with a steak knife.

The police have taken the brother away by the time I arrive. The mother and the daughter agree to talk to me. The father has just said "I don't believe in psychology and you people" and has left the room.

The tea ta'arof is repeated. It's amazing how, even at times of crisis, cultural mannerism is kept alive. Shortly thereafter, the mother breaks down and says "chikaar konam, pessaram-e." ("What can I do? He's my son?").

It turns out that the son has been beating the whole family on a regular basis, and the parents have covered it up for "hefz-e-aberoo." (to "protect their reputation"). This time, it got so bad that the neighbors called after they heard the breaking of glass.

Lunch does not sound appealing at all. I'm not saying that cases that don't relate to my own people don't get to me, but I feel there is a different connection when it comes to the Iranian clients.

My friend, who is a counselor, has always said that Iranian clients feel more comfortable with non-Iranian therapists and investigators. I find that to be true to a certain extent. It seems as though the Iranian families' reputation and taboos are to be maintained at all costs.

But at other times, when they have no language capability in a land foreign to them, having a "hamzaboon" makes a great difference. Abuse in Iranian families happen in all levels, from rich to dirt poor -- yes, there are Iranian families on welfare, more than we want to believe.

The next visit has to do with a report from the paramedics who brought in the emaciated body of an elderly Iranian man into the hospital emergency room. He's not going to make it. The son, who is supposed to be the care-taker, has not fed or medicated his father (for diabetes) for some time.

In my experience, it has happened that adults do the same to their parents for life-insurance money. I've just never seen it in an Iranian family. I referred the case to the district attorney's office for further investigation.

Next, I visit another elderly Iranian woman. She is widowed, and is living with her adult son, who is mentally disabled. She opens the door with a hazy smile, and invites me in. She doesn't even ask me if I want tea; she gives me a cup, and offers some pastries. She can hardly move, being in her eighties.

I ask her about her son (the suspected abuser) and she can't hold back her tears. She wipes a tear with the corner of her white "chaarghad" (scarf) and says "chi begam, be kee begam." ("What can I say? Who can I talk to?").

I want to make her feel more comfortable, but I'm at a loss. All I can manage to say is that I understand that it's tough for her, especially talking to a "gharibeh" about what's going on. She opens up little by little and tells me about her son's terrorizing of her.

She lives on the third floor of a small apartment building. The place is decorated with a great deal of taste -- "zogh-o-saligheh" -- typical of almost all Iranian homes I have visited. This sweet woman, who can barely carry herself, carries bags of grocery three floors up every week to make her son's favorite meals. The son goes around and yells at her in return, whenever he's not happy about his life.

The son comes in and goes to his room without saying a word. He is huge. I'm not a small guy, but this guy's twice my size.

I ask if I can talk to him. He agrees. He is anxious, and seems tense. I remember to stay close to the door, keeping myself between him and the exit, just in case. I ask him about his treatment of his mother. He says that it's his house, and he can do whatever he wants as a man. He doesn't want anyone's help, and he has no problems. "Injaa Amrikaast", ("This is America") he says, and that he is free to do whatever he wants.

He doesn't buy into the fact that we have legal and moral laws about treating others and says he is who he is. I don't want to argue with him, knowing that a discussion about feminism or Rogerian theories won't work with this guy. An argument will gitate him more and provoke a violent outburst. What I do say is that I will check up on his mother from time to time, and won't hesitate to press charges against him if he raises a hand on his mother.

I have three more Iranian families to visit, but I think I've had enough for one day. On the way back to the office, I think how my parents wanted me to become a doctor or engineer. Maybe I was better off that way. But no, I don't think I would be happy like that. Am I happy now?

Who was it that said us Iranians by nature are deep, and thus depressed? We thrive on finding something wrong with our lives, so we can worry about it. We are comfortable with a certain level of crisis, and only seek help when it becomes explosive. Are we like that? There is a message back in the office that the elderly man I saw earlier has passed away.

Two years ago, if someone told me about abuse occurring in Iranian families I would laugh at them. Who would think that we have the same problems and conflicts as the society we live in? Or is it the society? Were these issues never spoken about back home? Did I live a sheltered life as a child, or did we think violence in other families (and our own) was just "no big deal?"

I remember my friends coming to school with bruises from time to time (especially after report cards were given out), and I've heard "my dad beat me up when I was a kid, and I turned out alright" as an excuse for beating up their kids, but due to cultural desensitization, I never pathologized or questioned it.

I go home, get in the bedroom and drop on the bed. I turn to look at a drawing my Russian friend gave me, and what I have written on the side. The drawing is of a man walking into the horizon, with a book under his left arm, turning his head over his left shoulder. The writing is a poem from Forough: "in a room, the size of my loneliness, my heart, the size of love, gazes at simple excuses, for happiness."

I have twenty some years before I retire. Seems like a long way down the horizon. I wonder if I'll look back over my shoulder then to see if it was worthwhile. Maybe I should have been an engineer. But then...