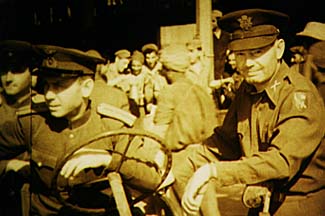 This poem by an American serviceman whose name has been lost, vents the frustration of the men and women who came from the green hills and rolling fields of the American mid-west to Iran during Wrold War II . These soldiers never saw Tehran or anything except the roads from Khorramshahr to Hamadan and Qazvin. It speaks more to the discontent of any soldier in a foreign land. They were sent on a "secret" mission and thus were given no information on Iran, the customs or climate until they arrived. Robert D. Burgener

Somewhere in Iran,
where the sun is like a curse
and each day is followed by
another, slightly worse;

Where the khaki dirt blows thicker
than the drifting desert sands;
where a Yank man draws
and wishes for a greener, fairer land.

Somewhere in Iran,
where a woman is never seen,
where the sky is never cloudy
and the grass is never green;

Where the jackal's nightly howling,
robs a man of blessed sleep;
where there isn't any whisky,
and the beer is never cheap.

Somewhere in Iran,
where the mail comes so late
that a Christmas card in April
is considered up to date.

Somewhere in Iran,
where the nights are made for love
and the moon is just a highlight:
As the southern cross above
sparkles like a diamond necklace,
on the throat of a tropical night -
It's a shamefull waste of beauty
'cause there's not a gal in sight.

Somewhere in Iran,
where the snakes and lizzards play,
where a thousand flies gather,
to replace the ones you slay:

Oh take me back to the good old USA
and let me hear the mission bell;
for this God forsaken outpost,
is just a substitute for Hell.