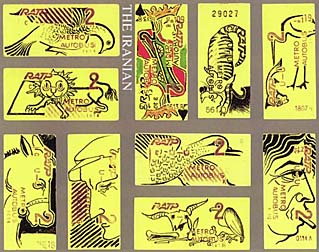 From a recollection by Jean Valade, a former classmate of Houshang Seyhoun in Paris, published in "Houshang Seyhoun - Half a century of artistic activities in the world of art and architecture" (1998, Sabco Interests, Inc., Houston):

[In the late 1940s] the School of Fine Arts [in Paris] was still part of the "Ivy League" (competitive exam universities). Its students had a reputation for being rabble-rousers, and those from the Defrasse-Madeline-Zavaroni Atelier (workshop), situated on the Visconti avenue in Paris, deserved that reputation.

One day an olive-skinned young man arrived, a Mid-Eastern type, who said, "My name is Houshang Seyhoun and I have come to take courses at the school." He left the School of Fine Arts of Tehran, where he had earned the "Grand Prize of Paris," which entitled him to enter as a junior and to present himself as a candidate for a D.P.L.G. diploma. Very quickly, we discovered that he was a designer without equal, even before he prepared his first project.

During the last days before our presentation, there was such an uproar at the design studio, the reason for which I have forgotten, all of us were throwing every object we could get our hands on. The design studio was a former workshop building that opened onto the Visconti avenue and was surrounded by walls on the other three sides, covered by a glass roof on a visible framework, the whole thing whitewashed; in short a rustic, hardy area that could withstand these emotional outbursts.

I can picture once again the surprised, shocked, scandalized look of my friend Seyhoun in front of this mess; I saw him take his display board under his arm, saying "I can't work here, I'm leaving."

Since I was close by, I followed him and tried to reason with him, explaining that this abnormal explosion was only a letting off of steam which had nothing to do with the real purpose of the school, which essentially was the research and cultivation of the Beautiful. I succeeded in convincing him. He came back to the School, where the storm had subsided, and finished his first project, which already showed the talent of the great architect that he would become.

Perhaps it was that day, that marked a friendship that would last for decades, through thick and thin, and God knows whether the mother country Iran knew of him during the recent political upheavals. I must say, to be fair, that Houshang soon became one of the trouble-makers of the School. He had caught (twigged) on the routine. "So it goes!"

His projects came one after the other, each one more brilliant than the last, finishing with an outstanding diploma, which was "The Avicennian Monument of Echbatane"

Seyhoun put his love and imprint on everything. He knew how to change things to show off their natural beauty. He put the best of himself into all of his works, thus realizing the message of the "Table d'Emeraude" (Emerald Table):

What a beautiful answer to partisan criticism.