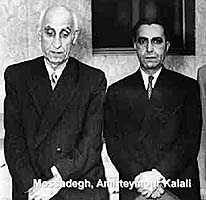 Led by Habib Ladjevardi, the Iranian Oral History Project has recorded the memoirs of 132 key political figures, comprising of approximately 900 hours of tape and 18,000 pages of transcript. The collection embodies the most comprehensive chronicle of eye-witness reports from modern Iran by key figures who defined its history. Microfiche of the collection has been purchased by libraries of major universities in Canada, England, germany, France as well as the United States.