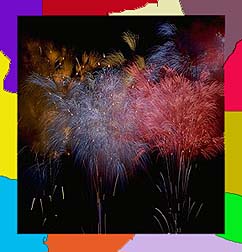 Twenty years ago four Iranians disembarked an Air France flight at JFK Airport about to make a new life in the land of the free and the home of the brave. They were my mother, father, older brother and I. It was July 4, 1979, and the Islamic Revolution was still fresh in our tattered psyche.

Protective of their anglophile children, frightened of what they had left behind and skeptical of what lay ahead, my parents had elected to leave the familiarity of Paris in favor of New Jersey, a strange sounding state where my mother's brother already lived with an American wife and two children.

From that eerie day, fourth of July has borne the expectation of a mythical tradition for me. As a child, each year I eagerly anticipated the much celebrated fable of the fireworks. But every year, at least in Livingston, New Jersey, they were a great disappointment. I remember one year, disgruntled that yet again the fourth of July had come around and I was no closer to seeing sky splitting fireworks, I convinced myself that I had simply missed the good part of the show all these years. I walked out of the house, exclaiming to my parents that I was going to see the fireworks completely this time, and raced over to the high school where they were being displayed. When I got there an unenthusiastic crowd eating Seven-Eleven hot dogs was moping around waiting... Fourth of July was just more important to me than it was to them.

The fireworks eventually started, although I couldn't really tell when. I was waiting for a light show, and instead the entire exercise seemed more like a practice run full of glitches than the actual fireworks. No sign of the Star Spangled Banner. When the crowd started dispersing, I actually had to ask, "is it over?" How come everyone knew but me...?

At 29, I finally realize that the fireworks in Livingston are fine for Livingstonians, but for a starry-eyed foreign kid, for whom America is the embodiment of all that is lofty, the puny crackedy-crack on the high school football field just doesn't live up to the expectation.

Ten years later, I finally got the fireworks of my dreams. Right here in New York City. A friend of mine was engaged to a Philippine diplomat at the U.N. He lived in a high rise near the U.N. on the East Side, close to the river. So my friend arranged to have some thirty of ther friends gather for drinks and then go up to the roof to watch the fireworks on the East River.

Oh what a show! I was like a child. Thrilled at the spectacle and mesmerized at the splash of bursting lights, I stood there, among some two hundred people, gazing across the sky. But for several moments, I could swear I was alone. I was part of those fireworks. I could read epiphanies through them, I thought. Each one was blasting and splashing around the sky only for me. It was a continuous light show. It must have gone on for an hour. The thunder of the explosion would rock my insides. I could feel my blood vibrate at it traveled through my veins. I couldn't get enough. I desperately wanted to commit every scene to memory.

Standing between us and the light show were the smoke stacks of Con Ed, Manhattan's power company. The sight of the exploding lights behind the uneven line of three smokestacks was the most picturesque urban scene I can recall seeing, in person or in pictures. I cried that night. Silent tears rolled down my face for no other reason than the fact that I was engrossed in the gesture of independence for a country I have, as tough as it is to admit, adopted as my own. I was proud for America, and I could feel the elation of being American and being part of what this nation has achieved in 200 years of history. Finally, I experienced the fireworks that had kept me thirsting for that sense of American grandeur I had expected as a child arriving in the U.S. at the age of nine.

This year, my husband and I went to Massachusetts for the 4th. We took a drive up through the country, stayed at a cozy inn, and breathed fresh chlorophyll like it was an oddity. You see, we live in a city that exists on the brink of perpetual asphyxiation. On the night of the 4th we heard there was a Ray Charles concert on the park in Tanglewood. We drove out, lucked out with third row center seats in the stadium and at the end of the show, got to see the scheduled fireworks. I didn't dare expect the same light show as I had seen five years earlier in New York City, but I must say, they were certainly better than Livingston's.

As I stood gazing up into the sky, lit sporadically with an array of bursting lights followed by the blast of the explosives, I felt those tears swell up again. I thought to myself, as Iranian as I will forever be, I do have a bit of a love affair with this country.

While my husband was clenching me from behind rocking me amid the crowd, I started whispering: "... and the rockets red glare ... bursting in air... that our flag was still there..." He suddenly stopped. Puzzled, he looked around, turned his head toward me and said, "to-ee?" (is that you?). I nodded with a sentimental smile and started a little louder... "Oh say does that Star Spangled Ba'aanner yet Wa'aave..." No one else around me, no one among the thousands of people gathered at that garden that night, was so much as audibly humming the Star Spangled Banner. Some even glanced over at me quizzically.

I love the part that goes "for the la'and of the freeee and the home of the bra'aave." That's the part my husband and I are here for. As a matter of fact, that's the part every foreigner is here in the States for.

Also by Maryam Shargh: Just Iran
Your favorite team, even if you are an Iranian-American