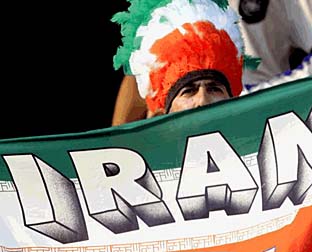 Before watching the game between Iran and the U.S. with our friends, my husband and I argued whether or not we should have gotten flags with the "Shir-e-Khorsheed" or "Allah" to waive. By the time we sat down to watch the match, which had kept us in eager anticipation of some big event the entire week before, the emblem in the center of the flag didn't matter - it was just the flag we were rooting for.

We grabbed our bagels, lox and cream cheese, the classic New York City Sunday brunch, and sat down for the pre-game commentary. A sign of things to come, I cried while they were showing footage of the hostages, the chanting crowds that characterized the revolution and the comments of the former hostages that said "it's time to put the past behind us." I remembered that it wasn't just the Americans who went through the hostage crisis, some Iranians did too.

I was barely 10 years old at the time. New to the United States and already feeling much like the stranger at school, the hostages crisis made me feel like the hated black sheep. Although my parents tried to rationalize my discomfort, I still walked into that small private school in New Jersey every morning, where everyone knew everyone else, and somehow felt shunned. The kids were all nice enough, but some would ask if I had an uncle or a cousin or someone at the embassy gates chanting the slogans that made us all quiver as we watched Nightline.

Just as I was sinking into that ey-vaay-deedi-chi-shod mood, the players came on. They sang their national anthem dutifully, as they had undoubtedly been instructed to do, they offered white flowers of peace to their adversary, a gesture the average American was surely baffled by, and posed for the historic joint picture enthusiastically. It was the epitome of goodwill conflicting with intense hope to persevere at all costs, and the sentiment came right through the picture tube.

The commentators were insisting that this game is apolitical. But then I wondered, why the white flowers? We are making amends - both sides are. A televised message from this president, another from the other, we are trying to dust off that old path between the two nations. It's slow going, but it's unmistakably going. Perhaps what the naysayers in Iran don't take into account is that the path of friendship between the two nations now lies on different terrain.

Iran is not the shah's Iran anymore. A revolution, a war and two decades of isolation later, these are proud, self sufficient people who may invite you into their territory, but they won't give away an inch. The Middle East is not the same Middle East as 20 years ago either. Iran is no longer America's only choice for an ally in the region and their stability in the area no longer depends on chumming up with Iran. Yes the two nations are trying to re-establish some relations, but they're not trying to become lovers again. Just convenient friends.

Three hours later we're screaming with joy. We couldn't believe the Americans hit both goal posts and the crossbar in 15 tries on our goal. Maybe God really is on Iran's side?

After the game we had plans to gather at a restaurant to celebrate, or mourn, with some 15 Persian friends. The reservations were at a French restaurant, but in light of the unexpected, Persepolis restaurant may have been a more appropriate choice. My husband and I got there a little late. As we walked in it was like shab-e saal-e-no. Everyone was enthusiastically scurrying around and greeting each other with "Mobaarak Baash-e!"

As new people arrived we all chimed in tabreek, laughed and jingled our glasses of champagne together in celebration. This was our night, the Iranian-Americans who just saw their two home nations play together in peace. It was as though we knew this game would become part and parcel of the effort for renewed dialogue, and we were celebrating it. The joy was that our favorite homeland had won.

We weren't concerned that the U.S. had lost, just that Iran had won. We all knew that Clinton planned to have a speech broadcast for the Iranian public, and we were eager to go home and log on for a quick search of early feedback. It was as though our mother and father were getting back together after years of separation and we were eager to see how it was going.

"Iraaaan" cried a voice out of somewhere, "Iraaaaaaan" chimed everyone else as we clanked our glasses together again and broke into laughter, dance and song. It was the kind of joyful celebration akin to a wedding, for the exception that every once in a while the French bartender would chant "on a gagné," and we'd all elatedly repeat in song "on a gagnee!" ("we won!").

We were thrilled, and we didn't remember if it was the "Islamic Republic of" or the "Golden Lion of" -- it was just ... Iran.

* On Football, Philosophy, and Joy
Watching the Iran-U.S. match in New York
By Laleh Khalili

* Iran-U.S: More than a game
On and off the field
By Hamid Taghavi