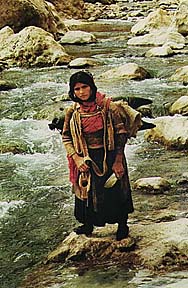 A jade green bird, blue capped, flew in the yellow dust near Ahvaz awakening memories from the unconscious: dreams of beauty and the bird, surrealistic images of the winging cape of the green hornet molting in the desert.

We stopped the car on the dull dusty road to hear the notes of the green bird's song. In the stillness of the desolate plane, a clear light trill quivered free in the desert air where lilac flowerheads of the star thistle bloomed.

The landscape was thick with golden wheat shimmering softly in the sunlight. At a cross section, a sign directed the traveler to Masjed-i-Solaiman, Ahvaz or Lali. Burning gas flares flashed against the sky of Masjed-i-Solaiman and flickered over the grass in fluorescent green; a contrast of technology in flaming wings and life-like birds in flight, in an environment that was peaceful to excess, among the Bakhtiari tribesmen in full-gathered black trousers, white shirts and black felt hats.

The Oil Company area, hedged in by lush green hedges and shady trees, provided a haven away from the hot sun. Up on the hills, a cluster of mud houses had been rebuilt with stone, still a raw sienna color, terraced up the hillside. Besides this, a building, like a sore thumb, stood out in granite colored stone, rising high in the shape of a castle fortress, in reality the new company recreation center.

Curving and twisting like a snake, the road led up to the company guest house where lunch was pleasantly served in the style of old English colonial: a cold foaming glass of beer in the Persian period bar, the small dining room with six tables covered with white damask cloth and bristling with silverware, a four course lunch, impeccably served and tea or coffee in the library.

The excitement of visiting new lands is seldom a disappointment. In the face of strangeness and loss of security, we may well grow humble again. But, without the comforting pattern of science, technology and organization, how catastrophic the earth may seem.

Out of the vast mountain sides of burnt clay, pale green plants clung together. Taking the wrong road to Lali, fallen boulders narrowed the way, leaving thick gouges in the muddy mountain side. The car climbed quite high and went over rocks and split asphalt. Not turning back, we continued until we reached an unpaved road following the rushing river in a steep line.

Absolutely alone, we ignored our lack of caution and stood upon the peak, or at the very edge of the world, the abyss of the future before us, above the heavens, and below the swirling, swollen river and a possible history lost in primeval mists.

The mud road continued without pause for more than an hour. It ended at a silver crisscross bridge, abandoned in nature, orphaned and isolated except for a plaque giving its height, width and weight capacity and its name: Lali Bridge.

The bridge spanned the gorge between the dark shadows of the mountain sides, suspended in the form of a fragile necklace stretched on a string of crystal paper clips. Time seemed lost in silence and we remembered the strange Celtic belief first read in "Swan's Way" by Marcel Proust:

"I feel that there is much to be said for the Celtic belief that the souls of those whom we have lost are held captive in some inferior being, in an animal, in a plant, in some inanimate object, and effectively lost to us until the day which to many never comes when we happen to pass by the tree, or to obtain possession of the object, which forms their prison. Then they start and tremble, they call us by our name, and as soon as we have recognized their voice the spell is broken. We have delivered them: They have overcome death and return to share our life...."

The planet Venus was the only shinning star in the pale blue sky above the Lali Bridge as we waited for the water buffalo, sheep and goats to cross, going home. A Bakhtiari woman dressed in a turquoise blue flowered skirt sat high on a mule surrounded by pots and pans while the herder in his stripped black and white wool coat and stick managed the animals. Goat bells rang out in the evening dusk over the sound of the river flowing beneath the full moon.

A rare moment passed in the puzzle of space and time as we turned to look back at the bridge for the last time, and a line on the horizon wavered revealing a broken spell, far away, trembling to join the great milky-white train of antelope, as we moved away.

Originally written in the early 1970s.

* Also by White Cloud
* Tehran: Too sweet to be true
Personal memories from the 1930s.

* Always on the move
The Bakhtiari nomads, photographed by Nasrollah Kasraian

* Travelers
* Cover stories
* Who's who
* Bookstore