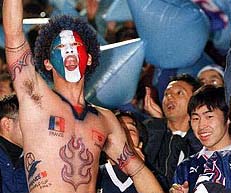 While Japanese fans filled the stadium in Malaysia,
Iranian fans abroad crowded bars and cafes
to watch on satellite TV

It was 4:30 am, on Sunday when the alarm went on. A nightmare? No it was my choice. I had spent the night at my cousin's two-room apartment (with six doors!) in a very old Victorian house in downtown Los Angeles. Right by the University of Southern California (USC).

His grouchy landlord hates my unannounced visits. This time I wanted to tell him that we are from Iran and the door to our house is always open, specially to relatives. But I thought maybe not.

By 5:00 am, I and two other cousins were driving on the empty streets of Los Angeles on our way to USC to watch the Iran-Japan game. The game was being broadcast by satellite and the Iranian students association had invited Iranians to come and enjoy the game.

It was like a dream. The best dream I've had at five in the morning. The room was full of fans. I knew half of them through USC and other connections. I got to know the other half as soon as the game started. Or I felt I did.

They were Iranians. They were all cheering for Iran. One goal after another we jumped, hugged and celebrated. It felt we were all part of the game.

Then Japan scored the winning goal in over time, sudden death. The room suddenly felt empty. Everyone in the room stared at the big screen with frozen faces. Is this it? Are we finished? Are we out? Is there any hope? Our boys, our country? Anybody, answer me. What a nightmare.

But there's another chance. We play Australia next on this coming Saturday. We will win.

And it does not matter when the game is played. We will be there to watch our boys play. After all, for once we Iranians in U.S. and the whole world are one entity. Football brings us together.

It's Saturday morning and the alarm goes on...