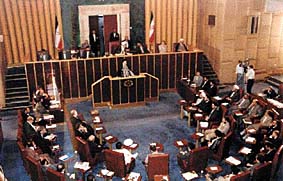 By Laleh Khalili
September 1997
The Iranian

Observations in Shiraz
You are relieved to find that taking domestic flights is not much different in Iran than in the United States. Desk agents are just as rude, flights are just as over-booked during summer, travelers find any excuse to proceed to the front of the line, and airline food is just as awful. The usual safety and security announcements at the beginning of the flight are relayed in both Farsi and English. The English translations are amusing ("When the oxygen masks drop from above, don't worry!"), and a couple of additional sentences have been tacked on, inviting traveling "sisters" to observe the "Islamic hejab and moral code" of the Islamic Republic.

Flying this early in the morning is glorious. Your country is a high plateau, adorned by gorgeous folds of mountains, oceans of them beneath you, this semi-arid sea of prehistoric geological upheaval. The cities are nestled in green valleys, and small lakes shimmer under the sun. When asked, the traveler sitting next to you explains that most of these lakes are salt lakes not suitable for drinking or watering plants. The landscape beneath you, with its simple shades of brown, beige, and honey takes your breath away. You feel profoundly exhilarated to be Iranian, to be in Iran, just to be.

The new Shiraz airport is spacious, light, modern, and evocative of the new National Airport in Washington DC. The renovations to the Shiraz airport have been made to accommodate thousands of Shi'ite pilgrims traveling from the Arab nations of the Persian Gulf to Mashhad. The air is much cooler and cleaner than in Tehran. The city has seemingly changed little. It is a slower-paced provincial town with its mud-brick walls, profusion of cypress and palm and plane trees, and bluer sky.

Hearing the soft, rounded drawls of your Shirazi relatives makes you happy. Having lived in the southern states of the United States, you had always drawn comparisons between the southern drawl and the Shirazi drawl, the pace of lives, and the similarity in the character, temper, and mood of the people of southern U.S. and the people of southern Iran. The driving is a bit more sane in Shiraz, and the people are more relaxed. They still sell ice in huge blocks on the street. The streets are narrower, and the women's attires less showy. After a few hours of conversation, the Shirazis seem even more political to you than the Tehranis.

In Shiraz, you hear a lot more about the recent elections. There is a sense of elation, triumph, and hope, all tinged with the perfunctory cynicism which is born of years of stasis. Khatami's definitive victory in the elections - which surprised all in the West - startled even the Iranians who had expected widespread election fraud. There are still rumors that the number of Khatami's votes were lowered so that his main opponent would not lose face. But Khatami's victory was so overwhelming that no one would have dared invoke the wrath of a frustrated and disappointed people by tampering with the overall results.

The more moderate candidates for the Majles did not fare as well as their president. In Shiraz, Jamileh Kadivar, a female candidate who belongs to the moderate Servants of Construction faction, and whose Islamic-feminist ideas are published in her fifth book, Zan (Woman), met with brutal, personal, and senseless opposition of the conservative Shirazi Imam Jom'e (Friday-prayer leader) who attacked her virtue, her hejab, her feminist positions, and even her name for not being Islamic enough. Mind you, this Imam Jom'e - Ayatollah Haeri Shirazi - is the same cleric who wanted separate cabs, separate sidewalks, and separate TV stations for men and women!

While those present at voting precincts recall that 90% of the votes cast had Kadivar's name on them, her conservative opponent, Dr. Nejabat was elected instead. When Khatami introduces his candidates for ministerial posts, this same Dr. Nejabat launches highly personal and vicious attack against the candidate for Minister of Culture, Ata'ollah Mohajerani, who happens to be the most beleaguered, controversial, and moderate candidate in the group, and the husband of Jamileh Kadivar. Apparently Mohajerani's ideas about opening the society to dialog and loosening the censorship on books does not sit well with the more conservative representatives of the Majlis.

In the days leading to the final vote, you scan the editorial and readers' comments sections of many of the main papers and take note of the popular reactions to the parliamentary debates. It seems like the radio of every car you ride and every television set you see is tuned to the debates, which are carried live. When ALL cabinet ministers are approved by the Majlis, cab drivers, store owners, people on the streets congratulate each other. During these days, you notice that the "trust of the people of Iran" and the "covenant with the people of Iran" and the "votes of the people of Iran" are emphasized by those candidates who are defending their positions to the Majlis. It reminds you of the phrase "people of the United States of America" employed by American politicians when they are attempting to justify a position.

In your conversations with relatives you realize that despair in the economic conditions of Iran and disgust at the widespread corruption in the officialdom has driven the voters to vote as they have. While in the political arena, hope tinges everything, economically, the youth of Iran face an unknown. Unemployment is high, consumer prices higher, and the value of the money is in a steady decline. Getting into the universities is becoming increasingly more difficult as the seats are limited and quotas of all shapes, sizes and colors abound. Men and women are postponing marriage as finding affordable housing in which they can start a family is becoming as difficult as haft-khan-e-Rostam (Herculean feat).

To get anything done, you have to stand in long lines, and grease the palm of any officials you can imagine. During your stay, your aunt attends a wedding where the father of the bride has paid two million tomans ($4,200) in bribes to certain Revolutionary Guards to avoid his party getting busted for revelry, loud noises, lewdness, or any of the other "vice" charges. The bribe-takers have to feed their children too. Salaries are low, jobs scant, and the basic staples are expensive; so expensive in fact that many of your relatives have become vegetarian to avoid having to wait in long lines and pay the sky-high prices for meat or chicken.

Of course, you realize that if you have dollars, the prices do not seem so high. So must the foreign tourists, speaking in German, French, Italian, and Japanese. In Shiraz, they are all over the place. The women are mostly wearing pants and loose shirts with the flimsiest scarves, and no one seems to mind. When they walk into the Bazaar-e-Vakil in Shiraz, the store-owners ignore all other customers. The prices for everything are higher for tourists. In Tehran, while an Iranian traveler can stay in a hotel for the equivalent of $8, foreign tourists can pay up to $150 a night. Visiting Arg-e-Vakil in Shiraz costs an Iranian 10 cents while a foreigner pays $2. You are glad that your aunt bargains for you, because after you have paid for a number of handicrafts, the store-owner tells you only semi-jokingly, that you count money like a foreigner and that he would have charged you more had you not had your aunt with you. The dollar seems to have defeated the toman, while the Iranian merchant is taking his revenge by overcharging the foreign visitor.

The Departure
In the days before your planned departure, you agonize over what the trip has meant to you, over your identity, over how you - at your current breadth and height - fit within this womb of which you were born. You are not certain whether your visit was a tribute to your past or curiosity about the place of Iran in your future. You are however certain that despite your transcultural and transcontinental migration which has defined and delineated so much of you, you are far more Iranian than you realized, that your empathy is stirred quicker in Iran and your intuition is far more attuned to Iranians. The country is yours, just as you belong to it irretrievably, and you realize that even hearing or speaking in the language which had been defeated in your dreams, awakens memories you had long considered lost.

You are equally devastated and revived by this cathartic homecoming. You recognize the inseparable twins of joy and sorrow in your moments of confusion, and you recognize that Iran will never be what you remember, who you remember, where you remember. Iran is a place that has moved twelve years further in time from your images of her, and finally she is, after so many years of tumult and unrest, finding a place in which she may rest and grow and reconcile herself with her children.

Leaving Iran is just as emotionally difficult as you imagined it would be. You manage not to cry in front of your relatives. You manage to get your baggage past the customs control with a cursory glance of the customs officer (who ten minutes ago, opened every package, every container and every box of the passenger in front of you). You manage to get a window seat at bulkhead on both segments of your trip back to New York, and unlike many on the plane your seats are confirmed and you don't have to wait impatiently, fearfully on a waiting list. You manage not to have any difficult questions asked at the Departure Passport Control.

And then, when they take your boarding pass and you forlornly board the bus that will take you to the plane, in the warm glorious night suffused with light from the city, you weep. You weep openly, with abandon, in regret, in sadness, in loneliness. In the golden fragrant night, you weep.

End of third and last: Part one -- Part two