Syrian air defenses inadvertently shot down a Russian surveillance plane over the eastern Mediterranean Sea, Moscow said on September 18, blaming what it called reckless actions by Israel that led to the deaths of 15 Russian servicemen.

The Russian Defense Ministry said in a statement that Israeli pilots conducting attacks on targets in Syria “used the Russian plane as a cover, exposing it to fire from Syrian air defenses.”

“The blame for the downed Russian plane and the death of the crew lies fully with the Israeli side,” Shoigu told his Israeli counterpart, Avigdor Lieberman, in a phone call, the ministry said in a statement.

“The Russian Defense Ministry, through various channels of coordination, has repeatedly called on the Israeli side to refrain from strikes on Syrian territory that create a threat to the safety of Russian servicemen,” Shoigu added, according to the statement.

“Israel expresses sorrow for the death of the aircrew members of the Russian plane that was downed tonight due to Syrian anti-aircraft fire. Israel holds the Assad regime, whose military shot down the Russian plane, fully responsible for this incident,” the Israel Defense Forces said in a statement on Twitter.

Israel said that it also held the Lebanon’s Shi’ite Hizballah group, an ally of Iran backing Assad in Syria, “accountable for this unfortunate incident.”

The Israel Defense Forces said its hotline with Russia to avoid clashes was “in use” on the night of the incident but that an initial inquiry shows that “extensive and inaccurate Syrian anti-aircraft…fire caused the Russian plane to be hit and downed.”

“The Syrian anti-air batteries fired indiscriminately and from what we understand, did not bother to ensure that no Russian planes were in the air,” the statement said, adding that Israel would “share all the relevant information” with Russia “to confirm the facts in this inquiry.”

“The president offers deep condolences to all of the relatives, loved ones, and colleagues of the crew members,” Peskov said.

State-run Russian news agency RIA Novosti said that the Israeli ambassador to Moscow had been summoned to the Russian Foreign Ministry on September 18.

The accusation against Israel came hours after the Russian Defense Ministry said that the Ilyushin Il-20 aircraft went off radar 35 kilometers from the Syrian coast at about 11 p.m. local time the previous day.

The Ilyushin disappeared from radar at around the same time that Israeli F-16 fighters attacked Syrian facilities in Latakia Province, the ministry said. 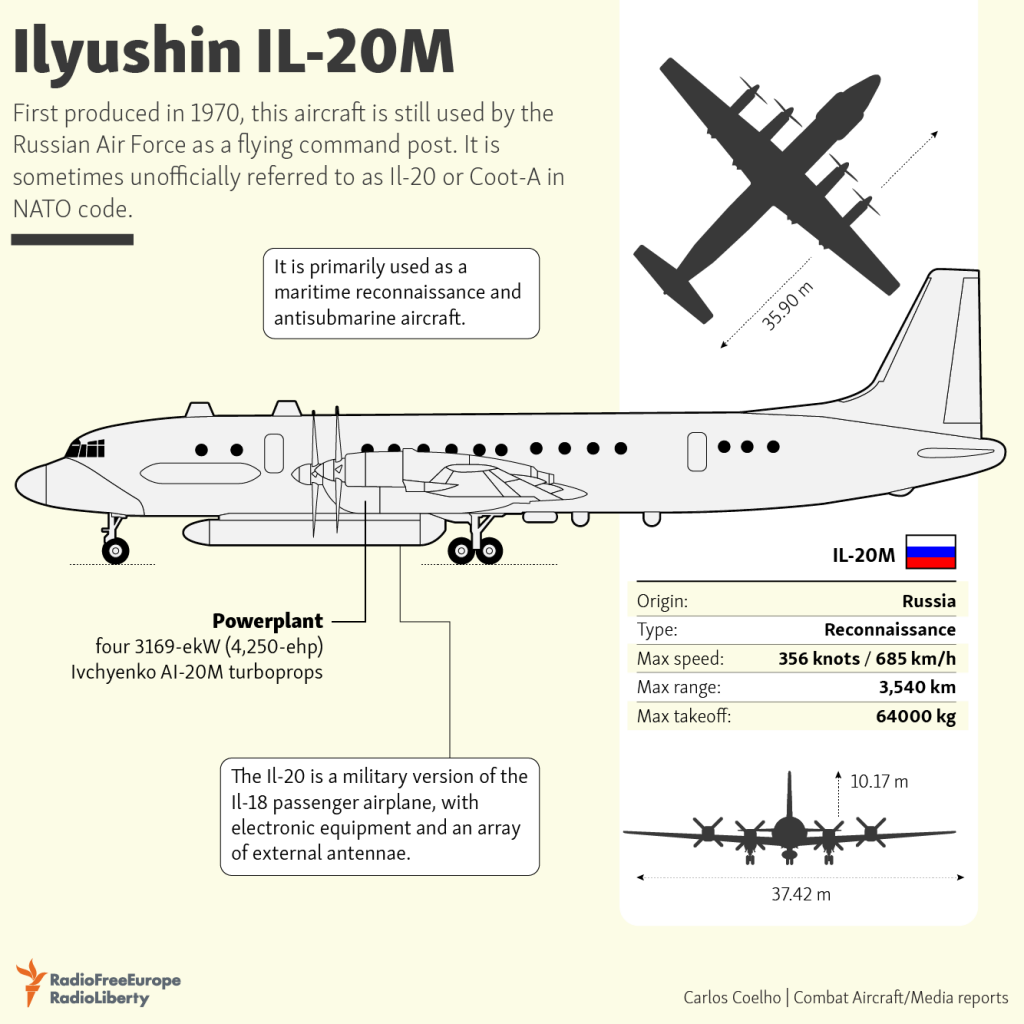 It said the plane was returning to Hmeimim air base in the northwestern Syrian province of Latakia, where the bulk of Russia’s armed forces in the country are stationed. Hmeimim is Russia’s main base for air strikes on rebel groups in Syria.

Fragments of the plane were found 27 kilometers west of the city of Banias, Russian authorities said, adding that some remains of the crew had been recovered as well.

There was no immediate comment on the Russian claim from the governments of Israel or Syria. But Moscow warned that the friendly fire incident threatened to damage its relations with Israel.

“As a result of the irresponsible actions of the Israeli military, 15 Russian service personnel perished. This absolutely does not correspond to the spirit of Russian-Israeli partnership,” Russian Defense Ministry spokesman Igor Konashenkov said.

“We reserve the right to take commensurate measures in response,” Konashenkov added.

Russia, whose military forces have launched a search operation, has given Syrian President Bashar al-Assad crucial support throughout the Syrian conflict, which began with a government crackdown on protesters in March 2011.

Several nations are conducting military operations in Syria, in some cases supporting opposite sides in the conflict. Communication lines have been set up between countries to mitigate the risk of unintended military confrontation in Syria.

Israeli defense officials have previously lauded a hotline set up with Russia to avoid clashes between the two sides’ air forces.

Netanyahu was Putin’s guest at a military parade on Red Square in May commemorating the defeat of Nazi Germany in World War II.

Israel is not backing a specific side in the Syria conflict, though it has admitted to conducting air strikes in the country targeting Iran and its allies, including Lebanon’s Shi’ite Hizballah group.

Before announcing its plane was shot down by Syrian forces, Russia had said rocket launches were detected from the French frigate Auvergne nearby around that time, though the French military denied any involvement.

A Pentagon spokesman also said the United States was not involved, and unidentified U.S. officials were quoted as saying Washington believed the Russian patrol aircraft was accidentally shot down with antiaircraft artillery by the Syrian government.

Konashenkov said the plane was downed by Syria using an S-200 air-defense system that Russia had provided.

State media said the explosions were suspected to have been caused by Israeli strikes.

Meeting in Russia’s Black sea resort city of Sochi earlier on September 17, Putin and his Turkish counterpart, Recep Tayyip Erdogan, agreed to create a demilitarized buffer zone in Syria’s northwestern province of Idlib to separate government forces from rebel fighters based there.

Turkey is backing rebel groups in the Syrian war and has troops in the country’s north.