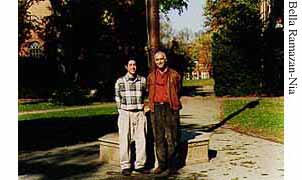 From Nersi Ramazan-Nia's letter in January 1996 to his son Nima, who is a college freshman at the University of California, Santa Cruiz.

Well, off you went to your turbulent and exciting world. And we are settling into our routine which is familiar to you.

One of the "firsts" of this Christmas was your coming back home [in Berkeley]. A special event for us and everyone else in our circle of friends, who are a collection , a precious collection I should say, of relatives and acquaintances. For the most part, they are tied to us by the golden threads of affection and familiarity.

The fact that we are living away from where most of us were raised has also served to purify our relations. If, for example, we had continued to live in Iran, some of these relationships would be more complicated. The dislocation brought about by revolution and migration has made us -- the bridge generation -- more appreciative of what (who) is left.

This great Persian tradition, of which you are a beneficiary, of living and breathing in a world of affection, was not constructed simply or quickly, or even with love only. There is a darker side to this business -- this business being: What does one do to sustain one's relations?

In life in Iran today, this is more apparent. Everyone has to adhere to very demanding social rules in order to survive. People have to spend an inestimable amount of time, much more than your or my sensibilities would consider reasonable, participating in rituals that symbolize "respect" and "caring." They are usually based upon less noble motives such as attaining position and money, but necessary nonetheless.

One has to go to so and so's funeral; one has to do this and one has to do that not only for relatives, but for acquaintances and especially for people of power. You can imagine that with weddings, births, deaths, new year's greetings, and a multitude of religious observances, not to mention the unpredictable sicknesses, how much time is left for scratching one's head! (Vaqt nemimooneh keh adam saresh ro bekharooneh!).

Here fortunately, we are devoid of the extremeness of these complicated and suffocating rituals. But to sustain and nourish what we have we have to submit to and endure some rituals, such as: calling to say hello; to give thanks; to say farewell, all done in a timely manner, which isn't all that much, considering what we will get out of it. Or to reciprocate the receipt of a gift or any other gesture of affection or thoughtfulness, almost no matter how irrelevant that gesture may appear.

At first, everyone extends kindness and affection to children without expecting much in return. But when the child grows up and becomes aware, then he has to decide how much he wants to invest in the affections he has inherited. Does he want them to stagnate or does he want to add sparkle to them, since nothing remains as is.

* Also by Nersi Ramazan-Nia
- The treasures of Lake Hamun
- The Bridge Generation
- Christmas: So what gives?
- Planet Elahian