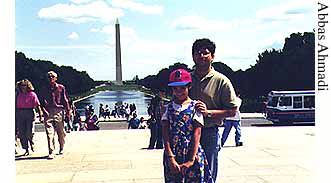 With my daughter Mahdiyeh in front of the
Lincoln Memorial, Washington, DC.

If you have ever been to Washington DC, you must have seen that large mass of water that's between the tall Washington Monument and the Lincoln Memorial. It's just a big, shallow, pond.

That night we stood there watching the full moon and its reflection on the water. There weren't any lights on the walkway lining the pond. We sat on a bench and held each other for the longest time. The kissing was so sweet and tender that even a cloud of giant mosquitoes drilling every cell on my exposed skin wasn't able to spoil the moment...

My cousin Iran woke me up.

-- "You're going to be late for your interview. Why did you sleep with your clothes on? What time did you get home last night?..."

I had come to DC from New York to look for a job. I had made an appointment with an employment agent after seeing his ad in the Washington Post. "Come on down anytime," he said on the phone, "We'll get you something. Don't worry." Worry I did. It was the first time I was looking for a job in the American market. I wasn't sure how to look. And the fact that I didn't really know what I wanted to do wasn't any help.

-- "Ahhhh... I see you're Iranian. Very impressive resume, Mr. Haveed," the energetic employment agent said. "You've come to the right city, my friend. This is the place you want to be."

So far so good.

-- "You have something that the United States needs; something that's not easy to find around here. You speak fluent Farsi and English, and you have many years of experience as a journalist. That's just perfect. You're the man!"

-- "Yes! The CIA is looking for qualified translators. Isn't that GREAT?"

You must be f-ing kidding.

The second job interview was not as exciting but it offered something that more or less matched my skills. One of the largest hotel chains in the world needed someone to write articles for their staff newspaper. I was given a copy of a speech by the company president and was asked to write a news story.

As I was typing the article, I realized what a long way I had come from an idealist reporter wanting to make the world a better place. Back then I reported on speeches by people who represented themselves as God's deputies on earth. What that did to my idealism was what termites do to a straw house. Now, I could translate Radio Tehran broadcasts for the CIA or write about the wonderful experience of spending the night at Econolodge. I could write anything for anyone, just like a plumber could fix pipes, anyone's pipes.

That night I got together with some friends and their friends who were going to a kalehpacheh place (please don't ask me to translate that) not far from DC. I was sharing a ride with Sussan, Elahe and Fariba. The guys, Fardin and his pals, were in the other car. Googoosh was blaring from the stereo and the girls were in the mood. They sang along the lyrics to "Hamsafar" (fellow traveler) as loudly as they possibly could. They howled every syllable as perfectly as a digital recording. When Fardin's car pulled next to us at a red light, I signaled: "HELP!"

It was well after midnight when we got to the place. It looked not too different from a typical downtown-Tehran kalehpacheh-ee, just a little cleaner and there was no long, green neon lights to attract hungry customers. And of course there was no big pot of fresh kalehpacheh and soup on a fire in full view of customers. There was the microwave. We ordered zaboon and maghz (good stuff, trust me) which were served with mounds of bread, fresh basil, mint and onion -- slices of lemon on the side.

Basically, all we did was tell dirty jokes and laugh with our mouths full. And I looked at each one of them and wondered. Who are they? How did they get here? Are they happy? I wanted to tell the story of their life; the little things and the big, from the way they walk and talk and work, to the way they kiss. And I will.

About the cover of this issue of THE IRANIAN
THE IRANIAN Staff, thanks & dedication...