Amid all the distressing news about possible extremist motives behind the arrest of 13 Jews in Iran, one wonders why some 30,000 Jews have chosen to remain in Iran despite the often hostile religious fervor of the post-revolutionary era. The fact is that prejudice and discrimination towards Jews has been relatively mild and Iranian Jews have strong nationalist feelings. The following is not an example of just one man’s kindness towards Jews, but an example of the close bond between Iranians in general, even under very dangerous circumstances. Thanks to Farhad Sepahbody for forwarding this piece. Also see a report on documents that shed new light. — Editor 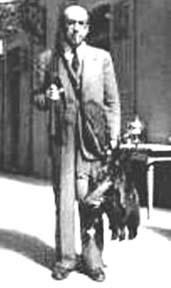 In June 1940, embassies were transfered from Paris to Vichy which had become the capital of the new French Government. In each embassy residence in Paris a caretaker was left behind.

At that unfortunate time many Iranian Jewish families lived in Paris. My uncle who liked to entertain, established close contacts with the German authorities and at the outset made it clear to them that Iranian jews were Iranians since the time of Cyrus the Great and therefore fell under the protection of Iranian laws like any other Iranian.

A letter was sent to my uncle by the German ambassador in Paris assuring him that no Iranian citizen would ever be harmed. As a result, the Iranian jews of Paris were not subjected to the nazi measures against the Jews.

When the round up of Jews began in 1942, and news about the “final solution” began to spread, the head of the Iranian Jewish community, contacted my uncle about his French co-religionists who were in danger of being sent to concentration camps.

My uncle had in his office a good supply of blank Persian passports. He took upon himself to also issue them to non-Iranian Jews who were facing deportation. As Allied forces invaded Iran, our ambassador in Vichy left and all communications with Tehran was cut.

Referring to the humanitarian attitude of Cyrus the Great who had freed in 500 BC the Jews held captive in Babylon, he had no doubt that the Shah and the Iranian government would confirm his decision after the war.

I was a diplomat in Paris during 1948 when the Iranian Jewish community (with its newly added “citizens’) visited my uncle and offered him a silver plater signed by their leaders, as a token of their deep appreciation and gratitude.

Sardari had also saved Mr. Petrossian — a well-known importer of caviar who had contacts with the French resistance — from the Gestapo .

My uncle later became charge d’affaires in Brussels. ln the mid-fifties he joined the National Iranian Oil Company and passed away in London in 1981.

Fereydoun Hoveyda served as Iran’s ambassador to the U.N. before the fall of the Pahlavi dynasty. He wrote this piece in December 1997 for Farhad Sepahbody’s web site on the Qajars