A small piece of the world (4)

While I was in Benares (Varanasi), India, I had the idea to make a trip up to Nepal. It was relatively close (a 24 hour bus ride to the border, another 16 to the nearest town) and I wanted to immerse myself in nature and see the Himalayas. I didn't have any climbing gear nor warm clothes but I made do with what I had and rented some stuff in a town in Nepal. After around ten days in Nepal, I took several buses back to Benares to celebrate the Indian holiday of Holi and continue on to Amritsar, Dharamsala, and then to Pakistan.

In Nepal, I stayed two nights in the second largest town in Nepal, Pokarah – a base camp for travelers and a tourist attraction but also home to thousands of locals. The first night I stayed there I befriended a couple of young Nepalis my own age and they took me out to a Nepali disco. It was a great time and I don't think I need to mention that Nepali women are beautiful. While in Nepal I noticed the division between the two types of Nepalis: the more Asian-looking ones and the more Indian-looking ones. The Asian-looking ones had less money, lived in the hills, and didn't own many businesses. The Indian-looking ones owned most of the shops and many of the political positions. Another interesting note to make is that I was in Nepal a few weeks before the notorious scandal regarding the homicides and suicides in the royal family in Nepal.

The economny of Nepal was in bad shape. Many women were left alone at home because men went abroad to find work and send money home. I talked to several women who had the same story: their husbands were in the Philipines, Singapour, Pakistan, UAE, all over Asia and the Middle East.

The next morning I set off for a six-day trek alone through the mountains on a circular path. Along the way, I stayed in small houses/hostels run by locals who live up in the mountains. Everything they have was carried by somebody up through the mountains. I stayed with one family and got along with them quite well. The daughter and I managed to communicate with her broken English along with gestures and good 'ol smiles. They had a tape deck and a small boombox and they repeatedly asked me to dance to the latest American music for them. Never one to displease, I obliged. I danced for them for hours (literally); me, alone, in front of a family of women as well as three construction men who were building a house down the road. They danced a bit for me as well – it was a blast. None of the women danced – it was men-only. We drank horrible alcohol and laughed for hours into the night. They wanted me to stay with them another night but I was on a schedule and wanted to get moving. The next morning I bid them adieu and gave my necklace to the daughter who I had become friends with. In return, she gave me her necklace and I still have it. The next morning I continued up hill, through the forests…

The next night I slept in a different house and there was a large snowstorm during the night. The next day much of the paths were covered in snow and I had no guide to show me where to go. At one point I became lost – a scary thought – and had to yell for the attention of an old women I saw through the trees. I shouted the name of the village I wanted to go to and she pointed in the right direction. It was the one moment where I really wanted a guide. Because of all the snow melting throughout the day, the paths had become rivers of mud. With nothing but sneakers I dove up and down the mountain, clinging to branches and trusting logs to break my fall. The Nepalis, however, were experts in climbing up and down these mountains in any weather with nothing other than flipflops. One time, as I was contemplating how to traverse a extremely steep decline that was nothing but mud, two Nepali men ran up behind me and without

any hesitation floated down the mudslide with only two bounds. I hardly believed it when I saw it – they could almost fly down the mountain. It took me 45 minutes to get down a portion of the hill that took them only five minutes.

Walking through forests, hearing nothing but the beating of my heart and the crunch of my feet over snow and and leaves, my short trek through a few Himalayan mountains was a beautiful experience. Away from the intensity and ferocity of Indian cities and villages, I enjoyed my time alone. After my trek and my time in Nepal, I returned to face another six weeks immersed in the insanity of India. 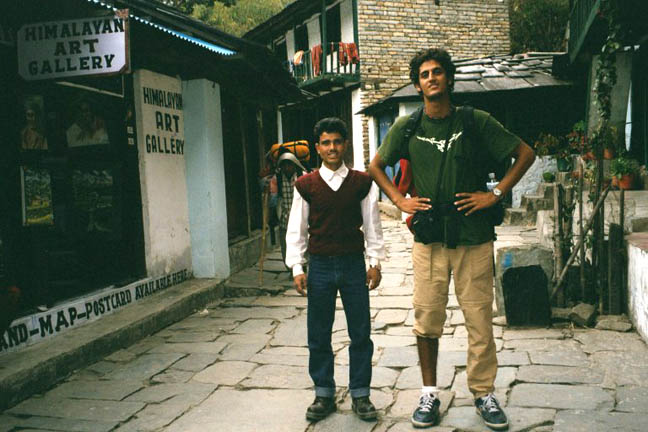 A friend I met while walking in a small Nepali village at the base of a mountain – a starting point for many treks in the area. As you can see, my right pant leg is rolled up because of the infection on my leg that caused me so much grief in India and Thailand. It hurt and had still not healed.#