Stop at the red light

This is another installment of my “Anatomy of urban chaos” series! Many, many articles, speeches and opinions have been given about the social, economic and political pickle in which Iran and her people find themselves.

I am not ignorant of the role that governments and political developments or even foreign agendas have played in getting our old motherland where it is today. But please look at this picture of Tehran's Mehrabad Airport terminal. 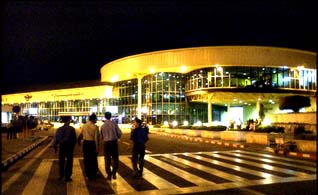 This is a beautiful new terminal in what seems to be a well maintained area with neatly marked streets. But look at the citizens who are walking in the foreground. They should be moving left to right and crossing the street. But instead, they are moving against oncoming cars, blocking traffic and putting themselves and drivers in danger!

I don't even know how many laws they are breaking. But please consider the fact that if one or more of these citizens are hit by a car right in front of this airport terminal, every official in that airport, including the pilots who fly the planes, would be deemed responsible by these guys.

My bet is that none of them would even “know” that they caused the incident by breaking multiple city codes and regulations to cause the hurt that came to them.

I'm not saying the people of Iran should stop blaming the regime and other culprits, for blaming them is justified! But simply look whether or not these people are doing everything to deserve better leaders under the rule of law?!

Among other things, one can blame the governments and political the establishment of Iran, present and past, for lack of proper education on how to be law abiding, how to drive, and generally how to be a “Shahrvand” (citizen).

I believe the solution to Iran's current political and social deadlock has to begin with small steps from the grassroots. It begins with stopping for the red light, using the pedestrian crosswalk, respecting the lanes, honoring the next person's right in a movie theatre queue, etc, etc.

Indeed, much work remains to be done before simply replacing the figureheads at the top!