Battle for the West

O stranger passing by, go tell the Spartans that here, faithful to their bidding, we lie.
– Leonidas King of Sparta (Quoted from Herodotous' “The Persian Wars”)

In 480 B.C. the Battle of Thermoplae set Spartan King Leonidas and his personal guards (The 300 Spartans) against the Persian King of Kings Xerxes I, who led the largest Army ever to enter Europe up until that time — over 200,000 men by modern estimates, drawn from all the peoples of the empire-and a correspondingly massive fleet of perhaps 1,300 ships (including transports and the pontoon vessels used to bridge the Hellespont (Dardanelles).

The epic and heroic nature of this Greco-Persian confrontation has led historians to ponder on this battle (often been referred to as the ” Battle for the West “), which is still taught in most Military Academy's worldwide as a classic example of a small force being able to defend a position against a far superior foe by strategy and guts.

As famous a historical event it can be, the only cinematic treatment of the battle of Thermopylae remains 1962's ” The 300 Spartans ” (also released as ” The Lion of Sparta ” produced by 20th Century Fox and directed by Rudolph Maté. It is an old, low budget B movie with some stifled acting, but the plot is great. Nothing can beat the classic story of a hero who unselfishly sacrifices himself for others. Allowing for its advanced age and some pretty stiff acting, this movie is still quite entertaining.

At a time when computers and their potential for animation were but a dream, movies relied on actors who performed rather than relied on Special Effects. Thus the e battle scenes are very well done, with a good deal of well paced spectacular stunts. If your movie watching goes back away you will recognize quite a few actors from the 50's & 60's.

Richard Egan as Leonidas gets most of the good lines directly quoted from Herodotus like “Come and get it” or “Today we will fight in the shade” when told that the Persian arrows will blot out the sun. Overall the film is great old stuff, a bit unhistorical but is Hollywood ever accurate? The Spartans had a superb army but were not democratic; the fact that they participated in a voting league of cities is the extent of their democracy. 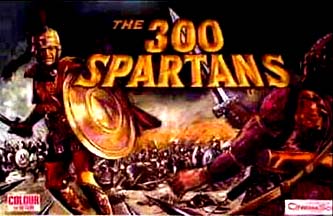 Poster release as the “300 Spartans”

The film focuses on the divisions between the Greek city states as the threat of the Persian Conquest nears. Ralph Richardson plays Themistocles, one of the Athens great statesman who overcame tremendous political problems to defeat the huge Persian empire and free the Greek kingdoms to the east, as well as Cypress, and Egypt from what is presented as Persian oppression and to ensure that Athenian values such as freedom, and human rights would continue in the world. 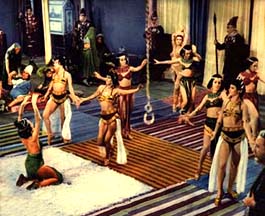 Meanwhile at the Persian court Xerxes (David Farrar) lives lavishly and in regal splendor. His court is of course a nest of intrigues of all sorts. Artemisia of Halicarnassus (Anne Wakefield), a Greek Queen with Persian sympathies seeks to win Xerxes favors if not his heart and encourages him to extend his mighty Empire to the Greek Peninsula. 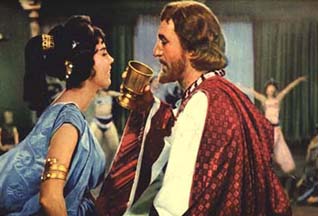 Intrigues are formenting in the Persian Court (Xerxes and Artemisia)

As the Persian threat becomes more imminent All of Greece holds its breath. The statesmen discuss war options, though Athens had built itself into a formidable naval power since the battle of Marathon, the Spartan's had build their reputation as a military juggernaut among amateurs that ensured its authority on land. 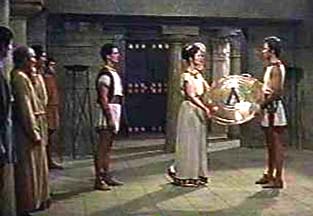 Spartans Prepare to leave their loved ones

What the Greeks needed was time-time to raise and organize their forces, time to deal with the quislings in their midst-and a place to fight in which the overwhelming numbers of the Persians could not brought to bear.

It was also necessary to meet the invader as far as possible from the major Greek cities, and after some false starts, the pass of Thermopylae (“the hot gates”) a narrow strip of land between the sea and impassable mountains on the northern border of central Greece offered the last and best chance to hold the host of Xerxes at bay. 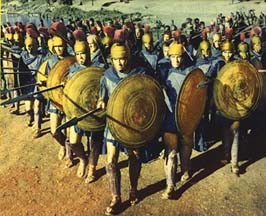 Leonidas leads his troops of 300 at Thermoplae 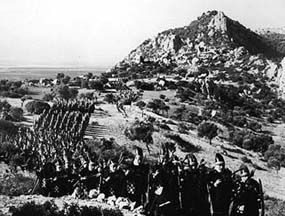 The Spartan king Leonidas (Egan), in charge of 7000 Greeks, is ordered to cut the advance of the Persian army. Xerxes army, 250,000 strong, under the command of Hydarnes (Donald Houston), Commander of the Immortals attempts to attack twice and is forced to retreat, due to the fact that the passage was so narrow that they could not fully deploy their force. 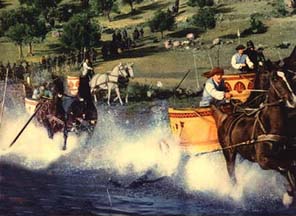 The Persians failed attempt to break into the Spartan lines

However, an avaricious local farmer, Ephialtes (Kieron Moore), led a force of Persian infantry through a mountain passage and next morning they appeared behind the Greek lines.

The Persian scouts probed toward the enemy and returned with strange news. The Greeks, in their position at the middle of the pass where the Zastano rock rose tall and sheer, had rebuilt an old wall across the passage to screen their camp. But in front of the wall, the Spartan outposts (who must have been recognizable in their distinctive scarlet tunics and cloaks) were taking their ease; exercising, and dressing their hair, habitually worn long.

It made an unmartial impression on the invaders, un aware that it was customary for the Spartans to take elaborate care with their appearance when they were about to put their lives in peril. Meanwhile, Xerxes sent a demand to Leonidas that he should surrender his arms forthwith. The Spartan king made a “laconic” reply that rings out like a defiant cannon shot: “Molòn lábe”-“Come and take them.” 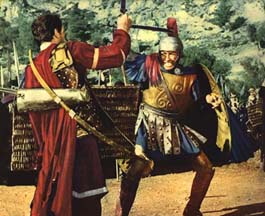 Leonidas confronts Hydarnes on the Battlefield

The Spartans face the Persian horde

Leonidas ordered the rest of the army withdraw, and held the passage with 300 Spartans. As a true Spartan, he chooses death over retreat. 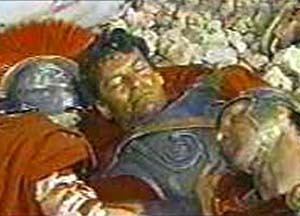 Leonidas dies with his men 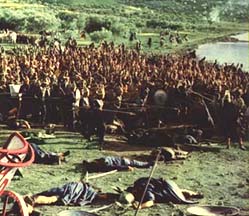 The film ends with the final demise of all 300 Spartans including Leonidas under the arrow storm of the Persian king, but the sacrifice held the Persians long enough to ensure the safe withdrawal of the rest of the Greek army. The message of heroism and self- sacrifice was strong indeed.

Historically while the battle was technically won by the Persians, it was a great moral victory for the Greeks. It helped to stiffen Greek resolve against the invader and served to rally many Greek city states which, until that point, were waivering as to which side to support.

More importantly, Thermopylae served to demonstrate Greek resolve and the superiority of Greek armour and tactics, even against overwhelming odds. The battle had a demoralizing effect on the Persians and their allies and this may have contributed to their defeat at Plataea, a year later.

In 479 BC, the combined forces about 60,000 men of several Greek cities, including a contingent of about five thousand Spartans under Pausanias, soundly defeated a force of over one hundred and twenty thousand Persians at the battle of Plataea.

This decisive battle, together with the naval victory at Salamis, ended all Persian ambitions of conquest in Greece, and the West. In fact, some argue that it may have changed the future course of history for all of western civilization.

The 300 Spartans gives the opportunity to admire the tactics and fight scenes of the Spartans which is illustrated with panache for the early 60's genre of movie making and the frustrations of the Persians in dealing with the Greeks is felt keenly as the movie moves towards the climax.

Richard Egan delivers a splendid and stirring performance in his lead role as king Leonidas. His convincing acting vividly portrays the style of leadership one would most ascribe to a typical Spartan king; forceful, competent, decisive, bold, brave, and confident.

The music and the scenery are nothing short of spectacular and inspirational (in a military sort of way). The courage, pride and forcefulness of the Spartans is portrayed to the hilt in this movie, along with some actual historical statements (made by the actors) as documented by Herodotus in his history of the Persian War.

As a film ” The 300 Spartans ” therefore appears as great old stuff. From a historic point of view however, the thing which can be disturbing for anyone who has some knowledge in ancient History is the portrayal of Spartans as ” freedom-loving people. " This is another example of Hollywood screenwriters' disregard of history and the portrayal of Europeans as good guys and non-Europeans as villains.

Many modern historians agree that the Persians were more religiously and culturally tolerant than the Greeks. Historically, Spartans were immoral and merciless slave owners. Ancient Spartan economy was based on a merciless exploitation of thousands of agricultural slaves. Spartan soldiers practiced their martial prowess by ambushing and murdering unsuspecting slaves.

Their political system was based on a military oligarchy. How can Spartans be characterized as “freedom-loving?” Maybe they loved their own freedom but not others'. Still, The 300 Spartans can be considered as a lively epic with some dignity. It was Filmed on location in Greece with the Greek army drafted as extras.

Strangely ” The 300 Spartans ” has never been released commercially to home video and is considered truly as a ” cult film ” by amateurs of the ” Sword and Sandals ” movie genre. 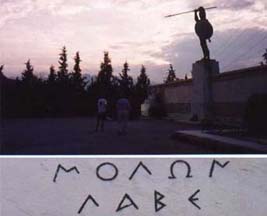